Pussy Galore is a fictional pilot who appeared in EON Productions' 1964 James Bond film Goldfinger, portrayed by the late British actress Honor Blackman. The character is a cinematic adaptation of the literary character, who first appeared in Ian Fleming's 1958 novel Goldfinger. Pussy Galore subsequently appeared in the video games GoldenEye: Rogue Agent (2004) and 007 Legends (2012) with Blackman's likeness and voiced by Jeannie Elias and Natasha Little respectively.

Pussy Galore is the personal pilot of gold smuggler Auric Goldfinger and the leader of a female aviator team called the Pussy Galore's Flying Circus, who is in the employ of the billionaire. However, Pussy and the others members of this faction are involved in Goldfinger's "Operation Grand Slam" consists to infiltrate Fort Knox, being in charge to dispensing the Delta 9 nerve gas across the aera of the bank in order to kill 60,000 people. So, Goldfinger and his task force (led by Oddjob and Kisch) to smuggle an atomic bomb (created by Mr. Ling) into the vault. Such an action would make the gold radioactive and useless for 58 years, and that the value of Goldfinger's gold will increase many times, thus making Goldfinger the richest man in the world.

Pussy Galore first appears as the pilot aboard Goldfinger's private jet where James Bond, unconscious after being shot by Kisch with a tranquilizer gun, wakes up to see Pussy standing over him. After introducing herself, the woman informs him that he is not dead, and that he was merely shot with a tranquilizer gun. She threatens to use it again, suggesting that he instead relax, have a cocktail, and enjoy the flight. When the plane lands, Pussy escorts Bond to Goldfinger's stud farm in Kentucky where they see the Flying Circus pilots. Galore assures them that they will get their assignments tomorrow night. She then dismisses them for the day before transporting Bond to Goldfinger's ranch and locking him into a cell. However, Bond manages to escape, and overhears Goldfinger discussing Operation Grand slam with a group of Americans gangsters, learning of the plot. Pussy catches the spy and pulls his legs out from under him, putting him back in his cell.

Later on, as Goldfinger is having some mint juleps with Pussy, he notices two men with binoculars spying on the farm. He realizes that they must be friends of Bond, and decides to invite the British for a drink, so that everything will appear friendly, as if Bond were out of danger. So he tells Pussy to bring 007 out of his cell and entertain him. After a brief drink, Pussy takes Bond into a barn to keep up the pretence. Bond however, tries to seduce her into foiling Goldfinger's plan, and Pussy uses judo to trip him. The two engage in an entertaining judo back and forth, and eventually Bond gets the upper hand, and the two kiss. Pussy so turns against Goldfinger and has the Flying Circus to replace the nerve gas with a harmless one while alerting the U.S. government about Goldfinger's plan, arranging for soldiers at Fort Knox to fake being gassed, so that Goldfinger can be baited and captured.

After Bond and his American allies have managed to deactivate the bomb and therefore thwart Goldfinger's plans, Pussy is forced to serve as a pilot of a plane that 007 boarding to meet with the President at the White House and that Goldfinger has taking over in order to kill him personally. Fortunately, Bond manages to kill Goldfinger by sending him through the window after the cabin is depressurised before escaping with Pussy using a parachute. While Galore tries to wave to the helicopter looking for them, Bond dissuades her and sleeps with her.

It is unknown what happened to Pussy after this. She was possibly arrested for his involvement in Goldfinger's plot, although it is not confirmed.

In addition, Pussy Galore has appeared as a playable multiplayer character in the 2002 game Nightfire. and can be unlocked by entering CIRCUS in the secret unlocks.

Pussy Galore later appeared in the 2004 spin-off Bond game, GoldenEye: Rogue Agent. Set in an alternate timeline, with its focus on the underworld of a futuristic 007 universe, Galore is a former cat burglar, employed by Auric Goldfinger as his personal pilot.[1] She participates in the underworld feud between Dr. Julius No and Goldfinger, assisting Goldfinger's golden-eyed enforcer by flying him into and out of various locations in her customised fuchsia pink helicopter. She is first introduced in the Swiss alps and airlifts GoldenEye to safety after the destruction of Auric Enterprises, taking him to their organisation's volcanic hub of global operations, known as "The Lair". There, she introduces him to the man who restored his sight; the organisation's scientific pipeline, Francisco Scaramanga.

She is subsequently sent to assist GoldenEye in Hong Kong during his mission to assassinate Dr. No. However, they are betrayed by his Triad contact Wu Li Yong and are attacked by Dr. No's forces. After surviving the double-cross, GoldenEye crosses the rooftops of Hong Kong and after several failed attempts to extract him, Galore narrowly succeeds in rescuing the enforcer using the aircraft's rope ladder. Shortly afterwards Dr. No launches an attack on Goldfinger's Midas casino in Las Vegas, hoping to procure the OMEN super-weapon locked away in its subterranean vault. Galore flies him from The Lair to the casino and later airlifts Oddjob and GoldenEye to safety after they activate the OMEN inside the vault - disintegrating Dr. No's forces. From there, she takes the pair to Dr. No's staging area at the Hoover Dam and provides a situation report to the enforcer.

Later after Goldfinger's death, she picks up Goldeneye and while the helicopter was on auto-pilot, they started having sex, which was witnessed by Blofeld and Scaramanga.

Galore also appears in 007 Legends, where the game depicts her in a role similar to the film, Goldfinger. Again, she is Goldfinger's personal pilot, but she ends up assisting Bond's entrance into Goldfinger's study and helps foil Goldfinger's Operation Grand Slam, the same operation described in the film, but was annoyed when Mr. Ling ignores her. She is also a secret playable character on the multiplayer mode.

A bold, bossy, rather intelligent, self-assured and inflexible woman, Pussy Galore supported Goldfinger in his aims without question and planned to take advantage of their wealth to move to an island in the Bahamas and live a primitive life once Operation Grand Slam was over. She thus appeared selfish and had little regard for all the lives threatened by her employer's plan and did not hesitate to contribute to it. Pussy also did her best to resist their attempts at seduction, but eventually betrayed Goldfinger after being seduced by Bond. 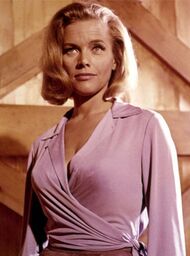 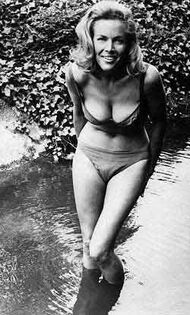 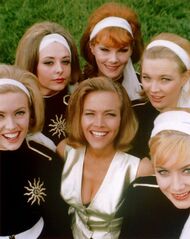 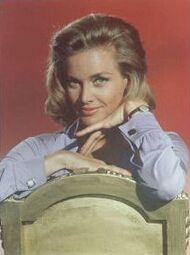 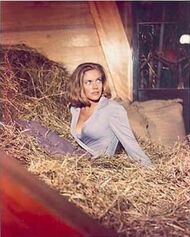 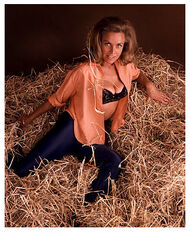 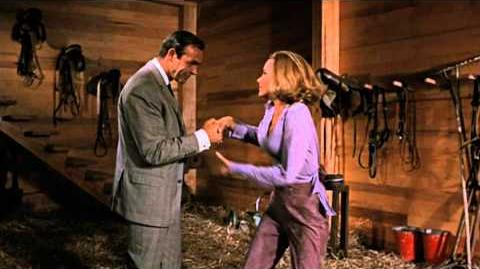 Pussy Galore as she appears in Goldeneye 007 reloaded videogame as DLC. 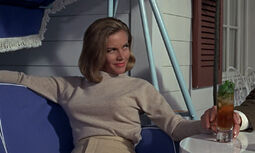 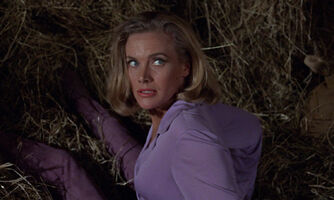 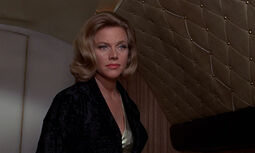 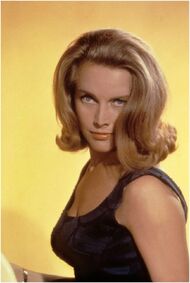