Quantum of Solace is a single-player platforming video game that was developed by Javaground and published by Glu Mobile for mobile phones. Released in November 2008 for Java-capable handsets, the game coincided with the 2008 James Bond film of the same name. A separate tie-in game published by Activision was also developed, likewise named Quantum of Solace.

Following the events of Casino Royale, MI6 and Bond are hungry for more information about the organization they are up against. Bond brings the recently captured Mr. White to a safe house in Italy to be personally interrogated by the head of the British secret service, M (Level 1: Closer Than You Think). After enduring a beating from Bond, White is liberated by M's traitorous bodyguard, who reveals himself to be a member of Quantum by shooting one of the agents present and fleeing across the rooftops of Siena (Level 2, 3: Rooftops, Long Falls). Bond confronts and kills the man. A single shred of evidence was found at the bodyguard's apartment, a note from a Haitian bank that links Mitchell to a Mr. Slate. Bond is sent by M to work his way through a hotel in Port-au-Prince, Haiti to find Slate. 007 is jumped by slate in his suite and having lost his firearm fights him hand-to-hand, eventually killing him and acquiring an SMG (Level 4: SMGs and Gold Chains). He finds Slate's briefcase and a note about him meeting someone.

Bond assumes Slate's identity and follows the trail to the woman he was sent to kill - Camille Montes. She is suspicious and tries to kill Bond, who bails out of her car and follows her to a warehouse and dock owned by Dominic Greene; the man who wanted her dead. Greene has her taken away in a small boat to be killed. 007 acquires a nearby boat and pursues them - sinking several vessels and rescuing Camille (Level 5: Luxury Cruise). 007 discovers that Greene is destabilizing the Bolivian government in exchange for land rights, which his organization can then sell to the US government for oil rights. Bond follows Greene to the Austrian city of Bregenz and sneaks through the backstage of the opera house to observe the organization's secret meeting (Level 6, 7: Arts and Culture, The Fat Lady Sings). M warns Bond to be cautious, as one of the men he photographs turns out to be British government official, Guy Haines. As Bond gets ready to climb down from the backdrop of the stage he is spotted by Greene's men and is forced to fight his way out of the opera house, acquiring a more powerful pistol and a shock grenade on the way (Level 8: Curtain Call).

On the roof of the Opera House he accidentally attacks an MI6 agent; drawing the ire of their mutual employers. 007 makes his way to Bolivia and uncovers Greene's plan to play off the Bolivian and the US governments; controlling Bolivia's supply of water. M surprises Bond at his hotel room in La Paz intent on capturing him, but Bond reacquires his weapons and escapes (Level 9: Posh Accomodations). Bond meets one of his few remaining CIA allies, Felix Leiter, at a bar in La Paz. Leiter is also distrustful of Greene, but the US government sends Delta Force to capture the spy. Bond stealthily evades them through the city slums, collecting a grenade launcher on the way (Level 10: Welcoming Committee) and makes for Greene's Eco Hotel in the desert (Level 11: Perla De Las Dunas). As a distraction, Bond intentionally detonates the fuel cells using an explosive charge. He confronts Greene on the roof of the exploding hotel and, having defeated him and foiled the coup, strands him in the desert without any water (Level 12: Solace).

Developed for Java-equipped handsets, Quantum of Solace is a side-scrolling platformer and is closely related to its 2006 predecessor (also created by Javaground) Casino Royale. Players control James Bond as they run, jump, climb and crouch behind objects; collecting various weapons including a pistol (and more powerful variant), sub-machine gun (and more powerful variant), shock grenade and grenade launcher. Players can shoot enemies they encounter with bullet fire which spreads according to velocity and distance.[1] 007 can also engage in hand-to-hand combat and execute special combo moves. Weapons are typically cycled through using the left soft-key and, while they have infinite ammunition, require re-loading after a magazine is depleted. Reload times vary between weapons, with more powerful equipment like the grenade launcher taking the longest. Levels vary between action and stealth; with 007 capable of hiding in doorways and stealthily neutralizing enemies.[2]

Reviewing the game, Keith Andrew of Pocket Gamer scored the game 6 out of 10, complaining that the game was not particularly "Bond-like" and criticised in particular the game's music, sprites and AI. Noting how the game "feels routine, and lazy with it", he remarks "that's exactly what Quantum of Solace as a whole feels like - a functional but wholly unremarkable cash-in that ticks boxes in terms of pure content but fails to raise your heartbeat when you're actually playing it."[2] 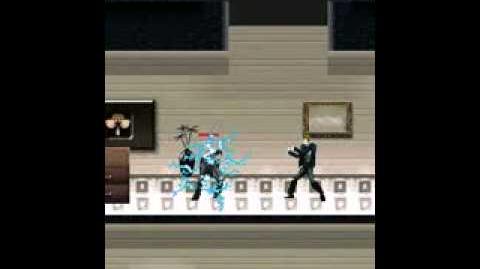 Retrieved from "https://jamesbond.fandom.com/wiki/Quantum_of_Solace_(mobile_game)?oldid=73389"
Community content is available under CC-BY-SA unless otherwise noted.