watch 03:27
Wiki Targeted (Entertainment)
Do you like this video?
Play Sound

"Take a look at your precious planet, Bond, it may be the last you will ever see of Earth."
― Rafael Drake[src]

Rafael Drake, also spelled Raphael Drake, was the fictional Brazilian-Russian owner of the nuclear decommissioning company Phoenix International. The character served as the main antagonist in the 2002 James Bond video-game 007: Nightfire and was voiced by American actor Michael Ensign.

Raised in the Soviet Union by a South African father and a Brazilian mother, Rafael Drake is a brilliant and charismatic businessman. In an attempt to eradicate post-industrial waste, he transformed his Phoenix International Corporation from an ecology-ravaging behemoth into the world’s leading "regeneration" company.[1] But although he poses as a humanitarian and opponent of nuclear weaponry, Drake secretly hoards supposedly decommissioned nuclear weapons as part of his "Nightfire" project - a scheme involving a global 'corporate takeover' by Phoenix International. National boundaries were to be eradicated, in their place continent-wide regions of agriculture, industry, energy production and research. Governments were to be replaced with a single board of directors and resistance would be crushed by threat of ballistic missiles mounted in Drake's island grottos. Hijacking the U.S. Space Defense Platform using a stolen missile guidance module, Drake planned to initiate a preemptive missile strike against major NATO bases to wipe out global security.

When a vital piece of missile guidance hardware is stolen from Japan, MI6 is led to believe that Drake is involved and send James Bond to investigate the industrialist's activities. The spy meets Drake for the first time during an elegant party organized by the businessman in his castle in Austria and his girlfriend Dominique Paradis, actually a member of French intelligence, provides to MI6 some information about Drake's operations. The British Secret Service learns that one of Drax's associates, Alexander Mayhew, has stolen a piece of missile guidance hardware, and he will give it to Drake at the party. The exchange goes as planned, but Bond takes surveillance of it, unbeknownst to Drake, or Mayhew. However, Drake's thugs capture Zoe Nightshade, a CIA agent who is also searching for the guidance piece, and Drake orders her to be imprisoned and interrogated, and the guidance piece put in the safe room.

However, Bond is able to retrieve the guidance piece and rescue Nightshade. After a hectic shootout, snow mobile, and car chase, the agents escape, much to Drake's frustration. The villain blames Mayhew for this and the latter contacts MI6 and asks to be turned into the police by Bond himself. In return, he offers to give MI6 crucial data on Operation Nightfire. Bond arrives at Mayhew's estate in Japan, but Drake send a gang of Yakuza thugs into the house and Mayhew is killed in the ensuing gunfight but manage to give Bond what he is looking for before dies.

After Bond and Dominique are caught by a hidden security camera, Drake learns that his mistress is a traitor.

Drake is later interviewed on a cleaning operation of a shut down nuclear power plant, not far from Tokyo. During the interview, he appears to show a concern for humanity, his workers, and for all life. But when the interview ends, he orders Armitage Rook, his right-hand man and head of security, to order all snipers back in position, as the plant is being used to hide a top secret Phoenix weapon that Drake intends to use for Operation Nightfire. However, Bond is able to avoid Drake's men and gain intel on the weapon, which is a prototype laser gun.

Later, when Bond is captured by another of Drake's henchmen, Kiko Hiyashi, he is brought to Drake at the Phoenix building in Tokyo. Drake has also captured Dominique, and he reveals that he knows that they are in on him, and orders them both killed. Bond escapes, but Kiko is able to kill Dominique.

Later, Bond and his partner Alura McCall infiltrate Drake's missile disassembly base on one of the South Pacific islands. While infiltrating the island via a submarine mode in his car, Bond learns that MI6's worst fears are confirmed because Drake has been stockpiling nuclear missiles, not disarming them. Fortunately, Bond is able to destroy the missiles. Later, Drake, along with Phoenix flight crews, and soldiers, board their space shuttles, and take off to attack the space defense platform. The villain successfully takes over the station, and proceeds to turn its missiles onto Earth, with NATO bases at their targets. However, Bond stowaway about one of the shuttles, and was able to disables the missiles targeting systems, causing the missiles to go of course, away from earth. While this happened, Drake tried to kill the spy using the station's laser defense systems but the laser draws its power from the stations core, and overusing it can cause the station's power core to go critical, and destroy the station. As the last missile goes off course, the core goes critical, Drake tries to kill Bond himself, only to be shot dead by Bond's Phoenix Samurai laser rifle, causing his dead body to drift off into space. 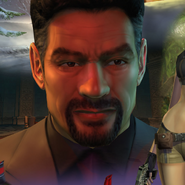 Retrieved from "https://jamesbond.fandom.com/wiki/Rafael_Drake?oldid=101067"
Community content is available under CC-BY-SA unless otherwise noted.