Raoul is a fictional intelligence operative and an ally in the 2002 James Bond film, Die Another Day. Portrayed by Mexican actor, Emilio Echevarría, the character is not to be confused with Raoul Silva, the main antagonist in Skyfall (2012).

Raoul is a sleeper agent who resides in Havana in Cuba. When James Bond arrives at Raoul's Cigar Factory, Raoul provides Bond with some information on Zao who has travelled to Dr. Alvarez's clinic on the island of Los Organos. Raoul also loans Bond a 1957 Ford Fairlane to travel there along with some supplies for Bond's cover as an ornithologist. Later Raoul determines that a Diamond from Zao's bullet pendant belongs to Gustav Graves. 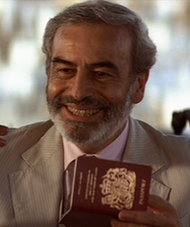 Retrieved from "https://jamesbond.fandom.com/wiki/Raoul?oldid=93585"
Community content is available under CC-BY-SA unless otherwise noted.