Red Grant or Krassno Granitski (born Donovan Grant) is a fictional assassin in the employ of Otdyel II, the execution department of SMERSH headed by Colonel Rosa Klebb. The character appears in the 1957 Ian Fleming novel From Russia, with Love and was subsequently adapted for the 1963 EON Productions film of the same name, as well as several other portrayals.

Born Donovan Grant in the small border village of Aughmacloy, Northern Ireland, Grant was the result of a midnight union between a Southern Irish waitress and a German professional weight-lifter who had been performing at a circus outside Belfast. Shortly after giving birth in 1927, his mother died of puerperal fever; leaving a request that the boy be named 'Donovan' (after his father's stage name, "The Mighty O’Donovan"). He was reluctantly raised by his Aunt and grew healthy and extremely strong, but very quiet; refusing to communicate with other children and taking anything he desired with his fists. Consequently, Grant was feared and disliked by his fellow students. His boxing and wrestling at local fairs gained him notoriety and, after he left school, he became a strong-arm for Irish republicans and local smuggling groups.

Red Grant became a killer at an early age, his urges to kill coinciding with the full moon. In October of his sixteenth year, he strangled a cat to satiate the 'feelings' and continued his lust killings initially with animals, culminating in the murder of a sleeping tramp. Subsequently, every month, Grant cycled to distant villages in search of new victims. By the end of his seventeenth year, the 'Moon Killer' had caused local vigilante groups to form and police reinforcements were brought in to assist. Despite being stopped and questioned several times, Grant evaded detection by attributing his cycling at irregular hours to fitness training as a boxer. Grant moved on to Belfast before he was caught and, after strenuous training, won the North of Ireland light-heavyweight championship in 1945, on his eighteenth birthday.

Shortly afterwards, he was called up for National Service and became a driver in the British Army's Royal Corps of Signals. The training period in England sobered him and it was in the woods around Aldershot that he learned to control his 'feelings' by consuming a bottle of whiskey. His transport section was subsequently posted to Berlin. It was there that Grant, intrigued by stories of Soviet brutality and recently disgraced for cheating in a boxing match, defected to the Soviet Union with top secret papers. After uncovering Grant's murderous tendencies, the interviewing MGB colonel debated whether to ship him off to a labour camp or have him shot. Eventually, he contacted SMERSH, who sent Grant back into the British Sector with an assignment to assassinate a vital West German spy, Dr Baumgarten. He succeeded and returned to the Soviet Union, where he began a year of internment and evaluation whilst Soviet spies painstakingly investigated his past. Grant devoted the time to keeping fit and learning Russian.

Although politically cleared, his evaluators agreed that Grant was an exceedingly dangerous member of society. He is transferred to 'Otdyel II', the Operations and Executions department of SMERSH, who changed his name to Granitsky and trained him to become their assassin. Over the course of two years he studied Marxism (which he fails miserably), espionage techniques, judo, boxing, athletics, photography, radio and marksmanship. On every full moon he was transported to the nearest jail and allowed as many executions as there were candidates available. In 1949 and '50 Grant was allowed to go on minor operations with Mobile Groups in the satellite countries. In 1951 and '52 he was granted Soviet citizenship and a handsome increase in pay. In 1953 he was given the rank of Major, with back-dated pension rights and a Crimean villa. Two bodyguards were attached to him, partly to protect him and partly to guard against defection. By 1955, Red Grant had reached the apogee of his profession as the Chief Executioner of SMERSH.

As part of an elaborate scheme to sow dissent in the intelligence community by murdering and discrediting a significant figure in western intelligence, Grant is chosen by SMERSH to stage a murder-suicide by killing British spy James Bond and their pawn Tatiana Romanova on-board the Orient Express. On their bodies he was to plant a forged blackmail letter from the girl along with the footage of their lovemaking captured at the Kristal Palas Hotel in Istanbul. The bait for the scheme, a Soviet Spektor cypher machine rigged with explosives, would be left at the scene of the murder, taking the lives of Western cryptography experts who attempted to tamper with it. After completing his task, Grant was to rendezvous with his SMERSH superior, Rosa Klebb, in Paris and act as her chauffeur for their journey back to the Soviet Union.

On-board the Orient Express, Bond and Romanova are approached by Grant, posing as a British operative named Captain Norman Nash. Romanova, unaware of his true identity, takes an immediate disliking to the man and is suspicious of his name, which in Russian means "ours"; a term used in Soviet intelligence when an operative is one of 'their' men. Bond also finds the man's mannerisms to be disagreeable. During dinner Nash sits beside the girl and clumsily (but intentionally) knocks over Tatiana’s glass of Chianti and spikes her replacement drink with chloral hydrate. Nash brings the drugged girl back to Bond's compartment and agrees to share guard duties in their stateroom. However, the next morning he allows his identity to be known and holds Bond at gunpoint, using a firearm disguised as a copy of Leo Tolstoy's novel War and Peace. In a moment of hubris, he reveals SMERSH's scheme and the time and location of his meeting with Klebb the following day. Bragging about his skill, he informs the spy that he will put a bullet directly through his heart as the train enters the tunnel. Bond evades death by blocking the path of the bullet, using a thick paperback book and his gunmetal cigarette case. Sprawled motionless on the floor, the spy carefully extracted a flat-bladed throwing-knife from his trick Attaché case and stabbed Grant as he attempted to murder the girl with Bond's Beretta 418. After a violent scuffle, Bond reaches for Grant's gun-book and shoots him to death. 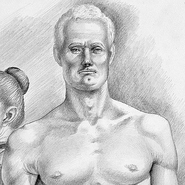 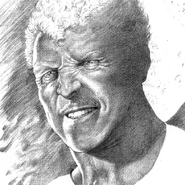 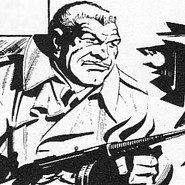 Artist John McLusky's interpretation of Red Grant for the James Bond comic strips.
Add a photo to this gallery

Retrieved from "https://jamesbond.fandom.com/wiki/Red_Grant_(Literary)?oldid=101163"
Community content is available under CC-BY-SA unless otherwise noted.