c.1963, onboard the Orient Express, near Trieste

Deceased; strangled with his own wire garotte

"My orders are to kill you and to deliver the Lektor. How I do it is my business."
― Red Grant to James Bond.[src]

Donald "Red" Grant was a fictional professional assassin employed by the secretive criminal organisation, SPECTRE. A secondary antagonist portrayed by British actor, Robert Shaw, the character first appeared in the 1963 James Bond film, From Russia with Love. He was based on the character Donovan Grant from Ian Fleming's 1957 novel of the same name but was subtly reworked for his transition from the page to the big screen. Bearing the likeness of Shaw, Grant would later be re-imagined for Electronic Arts' 2005 video game adaptation of the film and makes also an appearance in the 2012 video game, 007 Legends, but only as a multiplayer character. Red Grant was also subsequently re-imagined for the 2015 mobile game James Bond: World of Espionage.

Donald Grant escaped from Dartmoor Prison in 1960 (where he was presumably incarcerated for life following a murder conviction) and was recruited by SPECTRE in Tangier two years later in 1962, while on the run from the law. Subsequently, he had been intensively trained by the organisation and, when not on a mission, was resident at their island training facility.

Grant was assigned by SPECTRE Number 3 Rosa Klebb on the orders of Ernst Stavro Blofeld, to assassinate British spy James Bond to avenge the death of their colleague, Dr. Julius No. Grant and an unnamed man dressed as 007 engage in a game of cat and mouse in the island's grounds. In the end Grant completes the timed training exercise by strangling the man to death. After being inspected by Klebb, he departs on his mission.

Although it is Grant's mission to kill Bond, the early part of the film shows him shadowing Bond upon his arrival in Istanbul, Turkey, and taking on the role of Bond's protector to ensure 007 delivers (unknowingly) the Soviet's Lektor encoding device into SPECTRE hands. Grant acts as Bond's "guardian angel", covertly killing an interfering Bulgar agent at Hagia Sophia and sniping a Bulgar assassin who tries to kill Bond during a battle at the Gypsy camp. Later in the film, Grant shadows Bond on the Orient Express train and murders Ali Kerim Bey and Benz to hinder Bond's plans for escape. Later, Grant impersonates another British agent, Captain Nash, (whom he had murdered at the train's stop in Zagreb) to gain Bond's trust. At dinner on board the train, Grant drugs Bond's love interest, Tatiana Romanova, by spiking her wine with chloral hydrate. After the pair help Romanova back to Bond's carriage compartment, the assassin renders Bond temporarily unconscious with a blow to the head and disarms him. Grant reveals his identity and scheme to Bond, presenting an 8mm film recording of Bond and Romanova making love in his Istanbul hotel, as well as a forged letter, ostensibly written by Tatiana, threatening to turn the film over to the news press unless he marries her. He explains that the note will be found on Bond's corpse after the pair are dead, making their deaths look like a murder-suicide to the world.

Trying to stall for time, Bond asks for one last cigarette, but Grant refuses. Knowing that the assassin has taken his wallet, Bond offers to pay for a cigarette with 50 gold sovereigns hidden in his attaché case. Grant allows Bond to retrieve them. Knowing how the attaché case works, Bond opens it the correct way (by turning the latches inward before opening), and retrieves the gold sovereigns. With a clear hint of greed, Grant asks if there are more gold sovereigns hidden in the late Captain Nash's case. Bond tricks Grant into opening Nash's case the incorrect way, which detonates a tear gas cartridge, momentarily stunning him, and giving Bond a chance to lunge at his captor. After a brutal fight between the two adversaries in the train compartment, Grant attempts to strangle Bond with the garrote wire concealed inside his wristwatch. Bond takes advantage of his Q Branch attaché case again by producing a hidden, flat-bladed throwing knife and stabs Grant in his left arm, and then strangles Grant with his own garrote. 007 subsequently retrieves his wallet and money from Grant's coat saying, "You won't be needing this... 'old man.'"

In 2005, Red Grant appeared in the video game adaptation of From Russia with Love. His game portrayal roughly follows that of the film, albeit adding in new scenes to make the game more action-oriented, as well as giving him a female assistant named Eva Adara and changing his affiliation. Due to legal issues that have plagued the EON Productions series of films since 1963, the criminal organization SPECTRE was renamed Octopus. Grant is their chief assassin and follows Bond throughout the game, similar to the film. He gains 007's trust and boards the Orient Express, where he shoots Kerim Bey and proceeds to meet with Bond in the dining car. After failing to murder him there, Grant unleashes his men on Bond and escapes with the Lektor device through a train station in Zagreb. After a firefight, a defeated Grant stumbles onto the tracks, and is seemingly hit by a train. Later, Bond encounters Grant at Octopus' base of operations. The assassin descends from the control centre ceiling in an octopus-like apparatus. Bond attacks the war machine, and it eventually explodes. Grant crawls from the wreckage and, mocking 007's British principles, attempts to shoot him; only to be shot first, avenging slain ally Kerim Bey.

Red Grant after killing the fake Bond during training.

Bond strangles Grant with his own garotte.

The false Bond is garroted to death, as seen in From Russia with Love (2005).

Red Grant as he appears in the video-game From Russia with Love (2005). 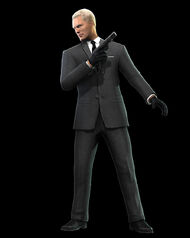 Bond confronts Red Grant, as seen in From Russia with Love (2005).

Bond fights Grant
Add a photo to this gallery

Retrieved from "https://jamesbond.fandom.com/wiki/Red_Grant_(Robert_Shaw)?oldid=99550"
Community content is available under CC-BY-SA unless otherwise noted.