René Mathis was the cover name of a fictional intelligence operative of the Secret Intelligence Service (SIS/MI6). Based on the literary character from the 1953 Ian Fleming novel Casino Royale, the character first appeared in the 2006 eponymous sequel and its 2008 sequel, Quantum of Solace. He was portrayed by Italian actor Giancarlo Giannini.

Mathis welcomes James Bond and Vesper Lynd in Montenegro, where he has been stationed by MI6. Le Chiffre has already bribed the chief of police so Mathis had him arrested for bribery (with photoshopped evidence). Mathis attended the poker game at the Casino Royale and watched Bond defeat Le Chiffre.

Bond believed that Mathis tipped Le Chiffre off about Le Chiffre's tell so Bond had him arrested and interrogated by MI6. However, Bond soon learned that Vesper was the real traitor, and in the end, M stated to Bond that Mathis has been cleared following Vesper's death.

Mathis, now retired in Italy, has been cleared by MI6 for his involvement with Le Chiffre and MI6 bought him a villa as compensation. Bond convinced him to help him track down Dominic Greene in Bolivia. However, Mathis was betrayed by an old 'friend' of his, the chief of the Bolivian Police Department, who had his men to assault Mathis in La Paz and place him in Bond's trunk. When the corrupt police arrested Bond, they ordered Bond to open his trunk, revealing a bloodied Mathis. As Mathis showed signs of being alive, the officers opened fire on him while Bond was holding him. Bond killed the officers and cradled Mathis as he died. His dying words were asking Bond to forgive Vesper. After taking Mathis' wallet, Bond dumped his body in a dumpster, claiming to Camille Montes that he wouldn't care. However, despite this, before his final fight with Greene in the ESO Desert Hotel, Bond avenged Mathis' death by shooting the corrupt Bolivian police chief to his death, saying, "You and I had a mutual friend!" 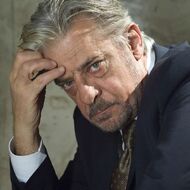 Retrieved from "https://jamesbond.fandom.com/wiki/René_Mathis_(Giancarlo_Giannini)?oldid=99264"
Community content is available under CC-BY-SA unless otherwise noted.