Rick Yune (born August 22, 1971 as Richard Yun) is an American actor, screenwriter, producer, martial artist and former model. The secondary villain, Zao, in the 2002 James Bond film Die Another Day, Yune later reprised his role in the 2012 video game 007 Legends. His most notable roles have been in the movies Snow Falling on Cedars, and the first Fast and Furious film The Fast and the Furious. He was part of the main cast of the Netflix original series Marco Polo until the series was cancelled on December 12, 2016.

Yune was launched to the spotlight after portraying James Bond villain Zao opposite Pierce Brosnan and Halle Berry, in the 20th 007 feature Die Another Day. Chosen for the part at age 31, Yune admitted he was intimidated the first time he stepped onto the set, but realized the best thing to do was just bear down and try his hardest. He said "History will tell where I stand in the ranks of Bond villains, I have no control over that. I was worried about being the nut that ruined forty years of history."[source needed] 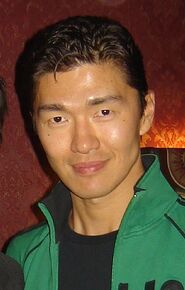 Yune in 2007
Add a photo to this gallery

Retrieved from "https://jamesbond.fandom.com/wiki/Rick_Yune?oldid=93247"
Community content is available under CC-BY-SA unless otherwise noted.