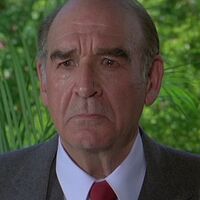 Robert James Brown (23 July 1921 – 11 November 2003) was an English actor, known for his portrayal of M in the James Bond films, succeeding Bernard Lee and preceding Judi Dench as well as M of the 1980s. Following Lee's sudden death in 1981, the producers, instead of hiring a replacement, decided to leave M out of For Your Eyes Only, out of respect for the actor and trade his lines with M's Chief of Staff Bill Tanner as Albert R. Broccoli refused to have the character recast. In 1983, they cast Brown to portray M. It is not clear as to whether he was the same character as Lee's M, or a different M, perhaps a promoted Hargreaves. Dench would take over the role in the 1995-film GoldenEye.

Retrieved from "https://jamesbond.fandom.com/wiki/Robert_Brown?oldid=80814"
Community content is available under CC-BY-SA unless otherwise noted.