A View To A Kill

The Silver Cloud II is used by James Bond and Sir Godfrey Tibbett, when posing as James St. John Smythe and his driver in A View To A Kill'.

It is widely believed that the actual car used in the movie was Cubby Broccoli's own Silver Cloud 'CUB 1', which was also shortly seen in Thunderball (although it seems to have been repainted over the years).

The plate seen in the movie, "354 HYK" however belongs to a Bentley S1, the Silver Cloud's sister model. That Bentley could have been the car which got pushed into the lake by May Day. 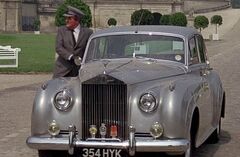 Allegedly the same car in 'Thunderball'.
Add a photo to this gallery

Retrieved from "https://jamesbond.fandom.com/wiki/Rolls-Royce_Silver_Cloud_II?oldid=83171"
Community content is available under CC-BY-SA unless otherwise noted.