Colonel Rosa Klebb (Russian: Роза Клебб) is the fictional head of Otdyel II, the execution department of SMERSH. The main antagonist of the 1957 Ian Fleming novel From Russia, With Love, the character was subsequently adapted for the 1963 EON Productions film of the same name, as well as several other portrayals.

Colonel Klebb is a high ranking member of the feared Russian counter-intelligence agency SMERSH, where she serves as the supervisor of Department II (operations and executions). She has a reputation for overseeing the interrogations of enemy agents in which, after exacting various methods of torture on the target, she speaks to them in a warm and motherly tone in an unusual and apparently effective method of extracting necessary information.

She made her name in the mid-1930's fighting in the Spanish Civil War for the socialist faction. She gained the favour of ranking intelligence officer, Andreas Nin and became his assistant and mistress. She cleverly avoided grouping with any factions within the Red Army and survived all of Stalin's purges. Eventually she took her superior officer's place after he was killed, which the novel suggests may well have been by her hand.

After the death of Lavrentiy Beria in 1953, Klebb gained the position of Head of Operations for SMERSH (Otdyel II - Operations and Executions). Klebb was present at every torture session conducted since she had became the Head of Operations. She would sit inches away from her victim on a small wooden stool, telling the torturer to use certain methods (in codes like "No86"). Then she would act nice to the victim, saying the pain could go away if they told her their secrets. She acted as a mother would to a pained child.

From Russia With Love

Klebb is assigned to spearhead an operation to get revenge on James Bond for his involvement in the deaths of two SMERSH operatives, Le Chiffre and Mr. Big. Teaming with Kronsteen and Red Grant, Klebb sets a trap for Bond, enlisting a cipher clerk, Tatiana Romanova, to pretend to defect, claiming to fall in love with Bond. When Bond takes the bait, Grant will kill him. This plan backfires, however, when Tatiana really does fall in love with Bond. After Grant is killed, Klebb must attend to Bond herself. After gaining Bond's trust, Grant corners Bond in his carriage aboard the Orient Express and in a moment of hubris reveals that he is scheduled to report to Klebb at noon the following day, in Room 204 of the Ritz Hotel, Paris. The pair then plan to drive to Berlin, with him acting as her chauffeur. Grant attempts to kill Bond as planned, but is himself shot to death by 007, who takes his place at the meeting the next day.

Working in conjunction with René Mathis of the Deuxième Bureau, Bond planned to kidnap and smuggle Klebb back to England by plane. He encounters her in Room 204, dressed as a wealthy white-haired widow, and knitting in a low armed chair. Beside her was a writing desk with a tall old-fashioned telephone with a receiver on a hook, and an ivory-buttoned bellpush. Initially unsure about her identity, Bond gradually noticed small details which seemed out-of-place; her nicotine-stained moustache in a room devoid of ashtrays, her discoloured knitting needles, and a call bell which had no wires leading from it. He followed his instincts and narrowly avoided being shot by a gun hidden in the telephone. Klebb attempted to stab him with poison-coated knitting needles, but was eventually pinned to the wall using the legs of her chair. Mathis and his laundry men arrived to remove the 'laundry' for extraction to England. However, as she departed, Klebb successfully poisoned Bond by means of a venom-tipped blade hidden in her shoe.

The novel ends with Bond collapsing to the floor; Fleming had intended to end the series at that point with Bond's death. In the following novel, Dr. No, a conversation between M and famous neurologist Sir James Molony reveals that Bond survived due to Mathis' timely intervention. When Malony inquires into the fate of Klebb, M pithily states, "Oh, she died". It can be assumed that she was killed after attempting to kill Bond.

Fleming explicitly stated in the novel, that Klebb is a lesbian. She is described as hard, almost masculine in appearance, coupled with several instances when she touches Tatiana and comments on her beauty. She, at one point, attempts to instigate congress between her and Tatiana, who runs out of the room screaming when she sees Klebb wearing lingerie. 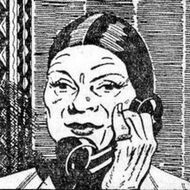 Retrieved from "https://jamesbond.fandom.com/wiki/Rosa_Klebb_(Literary)?oldid=84248"
Community content is available under CC-BY-SA unless otherwise noted.