"Who can the Russians suspect but the British? The Cold War in Istanbul will not remain cold very much longer."
― Rosa Klebb[src]

Colonel Rosa Klebb (In Russian: Роза Клебб) is a fictional character and one of the two main antagonists (alongside Tov Kronsteen) in the 1963 James Bond film From Russia with Love. She was portrayed by the late actress and singer Lotte Lenya in the film version. Bearing the likeness of Lenya, the character would later be re-imagined for Electronic Arts 2005 video game adaptation of the film. She is also a playable character in the 2010 video game GoldenEye 007 and in the 2012 video game 007 Legends.

Rosa Klebb was the Head of Operations for SMERSH who has defected to become a member of SPECTRE. Her defection was kept quiet and only the highest of Soviet officials knew of it. Ernst Stavro Blofeld refers to her as "No. 3" indicating that she is the third highest ranking individual in SPECTRE behind only himself and Emilio Largo. Tov Kronsteen briefed her and Blofeld on the mission, saying that they would obtain a Lektor decoding machine from the Soviets with the inadvertent assistance of a Russian girl, and the British Secret Service.

He was sure that MI6 would send James Bond, so SPECTRE would also be able to take revenge for the killing of Dr. Julius No. Klebb was given the responsibility of choosing the girl as well as the henchman to kill James Bond. She selected Red Grant for the mission and visited him at SPECTRE Island, punching him in the stomach with a knuckle duster to test his strength. Grant barely flinched and Klebb left, telling him to report to her in Istanbul in 24 hours.

Klebb then went back to Istanbul and met Tatiana Romanova, who she had selected to lure Bond to the country. She told Tatiana that she had been selected for a mission to give false information to the enemy, not telling her the real plan. She also said that she would be shot if she talked, and that she wouldn't leave the room alive if she refused to obey her orders. Klebb checked her out, and asked about her prior lovers, to see if she would be good enough for the assignment.

Grant tailed Tatiana and Bond around Istanbul, with Klebb sometimes assisting him. In the honeymoon suite, Klebb was behind a two-way mirror, filming them both, to use as part of the plan later on. When Grant failed the mission, getting killed by Bond, Klebb and Kronsteen reported to Blofeld, each blaming the other for the plan's failure. Blofeld said that SPECTRE doesn't tolerate failure, and called in his agent, Morzeny. Blofeld reminded Klebb that she knew the penalty for failure to which she responded affirmatively. Morzeny flipped a poison tipped knife out of his shoe and Klebb braced for the blow, but it was Kronsteen who got spiked and killed much to their shock. Klebb showed visible relief at her survival and was given one last chance to get the Lektor and kill Bond.

Posing as a hotel maid, she enters Bond's suite and attempts to take the Lektor; when she is caught, she points a gun at Bond. Tatiana Romanova then distracts her, causing her to drop the gun, and Bond and Klebb enter into a deadly dance with the latter trying to spike him with her poisoned shoe blade. Bond manages to hold her at bay with a chair long enough for Tatiana to get a fix on her and kills her with one shot. 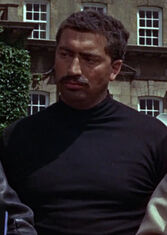 It is strongly implied in the film, and explicitly stated in the novel, that Klebb is a lesbian. Her hard, almost masculine appearance, coupled with several instances when she touches Tatiana and comments on her beauty or her reaction when Morzeny touches her, give a 1963-era stereotype for this aspect of the character. The lesbianism of Klebb was toned down in the movie, probably to avoid a restricted rating, though it is strongly implied in the novel. Klebb's poison-tipped shoe has also become an icon, even making a small appearance in the Pierce Brosnan film Die Another Day; they can be spotted in Q's laboratory and Bond deploys the blade, prompting him to comment on the deadly but fashionable footwear.

Klebb in the GoldenEye video game 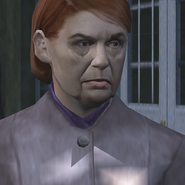 Klebb in the video game adaptation