Rosie Carver was a fictional CIA agent operating on the fictional island of San Monique but also a double agent working for Dr. Kananga. The character appeared in the 1973 James Bond film Live and Let Die, portrayed by American actress Gloria Hendry. Rosie was subsequently adapted for the James Bond 007: Role-Playing In Her Majesty's Secret Service tabletop role-playing game.

In the film, Rosie is a rogue CIA agent who is secretly an underling of Dr. Kananga, who sends her to kill James Bond. When arriving at a hotel in San Monique, 007 is surprised to learn that "Mrs. Bond" has already booked into the suite. She casually mentions that Bond is only her second assignment; her first was being previously paired with Baines, suggesting that she is incompetent at her job, or more likely inexperienced if this is only her second mission. This is seemingly confirmed when she overreacts twice after meeting Bond, once after finding a dead snake in the bathroom and again when she finds a voodoo hat in one of the bedrooms in the suite.

After spending the night together, Bond and Rosie head off deep-sea fishing, while they check over the rest of the island. Bond hires Quarrel Junior and his boat for the job. While aboard the boat, Rosie finds a secret compartment with radio transmitters and weapons and jumps to the conclusion that Quarrel is a villain. When she spots him coming up from behind Bond with a rope, she holds the fisherman at gunpoint. Bond, however, clears up the situation, revealing that the two are acquainted. When she apologizes for sticking a gun at the captain, Quarrel Junior dryly remarks he could have been killed too, had Rosie switched off the pistol's safety mechanism, to which she is surprised by her blunder. This suggests that Rosie in also inexperienced in firearms and close quarters combat.

The pair arrive near the alleged location of Baines' death. After a picnic where they make love, Bond confronts Rosie, and learns that she is actually in the employ of Kananga and she was to lure Bond to a trap where he would be killed. When Bond threatened to kill her if she didn't come clean, Rosie called his bluff and runs away, being killed only moments later by one of Kananga’s scarecrows, shot dead by a gun in its mouth.

*Rosie Carver is Bond's first on-screen black love interest. Her character was initially written as a white woman (and the lead Bond girl, Solitaire, as black) before the producers made the switch. During filming, the producers actually thought about sparing Rosie, but ultimately they went ahead with the original plan and killed her off.

*A painting of some of the film's characters were used as a models on the tarot arcana promoting the film, with Baron Samedi representing Death and Solitaire representing Fortune. Rosie, wearing a bikini, represents the Fortune card. 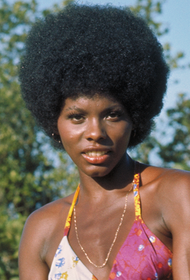 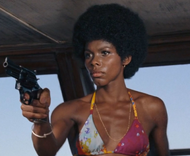 Rosie is held at gunpoint by Bond.

The death of Rosie Carver. 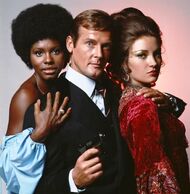 Gloria Hendry in a promotional photo with Roger Moore and Jane Seymour. 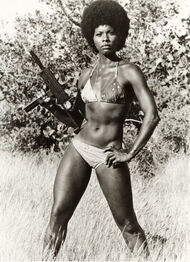