SPECTRE Island is a covert training facility belonging to the criminal organization SPECTRE and run by Morzeny.

It is first seen in the pre-title sequence of From Russia with Love, in which Red Grant stalks a SPECTRE operative (disguised as 007) through a hedge-maze in the grounds.

Alongside the mansion is an extensive training area.

Scenes for From Russia With Love were filmed at Heatherden Hall on the grounds of Pinewood Studios in Buckinghamshire, England. 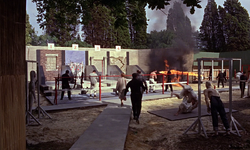