"People want oblivion and a few of us are born to build it for them, so here I am, their Invisible God, sneaking under their skin...We both eradicate people to make the world a better place. I just want it to be a little tidier. "
― Safin explains his motives to Bond [src]

"I'm a man willing to kill the person you love most..."
― Safin threatening Madeleine Swann in her apartment[src]

"James Bond. Licensed to kill. History of violence...I could be speaking to my own reflection. Only your skills die with your body. Mine will survive long after I'm gone...James Bond. I've made you redundant..."
― Safin to James Bond.[src]

Lyutsifer Safin is an anarchist, and a former assassin of SPECTRE.[2] Portrayed by American actor, Rami Malek, he is the main antagonist of the 2021 James Bond film, No Time to Die.

"Safin is pulling all the strings... He’s controlling all of those megalomaniacs out there. He’s created them."
― Producer Barbara Broccoli on Safin's influence

"There’s a sense this guy could be from a large- scale chemical/pharmaceutical family... someone who’s not necessarily a public face, but who wields a lot of power behind those people."
― Director Cary Joji Fukunaga teasing Safin's background

Nothing is truly known about Safin's origins, nor his real name, for the reason he is shrouded in complete mystery. The only facts known about him are that he once worked as an assassin for SPECTRE[2] , has a background in the pharmaceutical/chemical industry[3], and has no connections to any religions or ideologies.

However; Safin is confirmed to be having a lair composed of a submarine pen residing on an island[4].

"We’ve thrown the book at him on this one. He is really the supervillain. He’s the one that really gets under Bond’s skin. He’s a nasty piece of work."
― Producer Barbara Broccoli describing Safin's personality

"What I really wanted from Safin was to make him unsettling. Thinking of himself as being heroic...Safin is a formidable adversary and James Bond has to adapt to it."
― Rami Malek describes Safin's portrayal in a featurette video.
"He's quite unique. Very complex. Daniel calls him misunderstood."
― Rami Malek describes Safin and shares Craig's words of describing Safin

"And now there's someone new out there. More dangerous than anyone he's ever encountered and whoever they are is smarter and stronger than SPECTRE."
― Director Cary Joji Fukunaga describing Safin

"What he wants and what he's willing to do makes him a very frightening character. Both personally to Bond, but also on a global level..."
― Cary Fukunaga on Safin

Considered as a powerful key figure in the world of terrorism and anarchism, Safin is also known to be a nearly supervillain-esque individual, using his skills and his gifted talents and intelligence to outsmart Bond into driving away from his original moralities and codes he used to work or follow after, doing so like his greatest enemy before him, Ernst Stavro Blofeld.

Safin, in addition, is said to be knowledgeable on how to get under Bond's skin, making him Bond's most cruel and sadistic nemesis he's ever faced. When he is encountering James for the very first time, he coldly speaks of Bond's role in MI6 and compares Bond to himself, saying that with Bond's history of violence, Safin sees him as his own reflection, but cruelly mocks Bond's skills, promising his skills, unlike Safin's, would die with his own body while his would survive and live long after he would die, stating that he has succeeded in making Bond redundant.

Safin appears to be roughly in his thirties, with short black hair, dark brown eyes and heavily disfigured face.

Safin, in addition, is wearing a long dark blue coat and a black long sweater, and, often wears a white snow coat with a golden-brown fur in its hat. Noticeably, he also seems to frequent wearing a Noh mask, a mask typically used in Japanese theater.

"I would never shoot something like that down. It’s intriguing,"
― Rami Malek when asked about his character being Dr. No

Safin in the promotional poster

Safin encounters Swann in her house 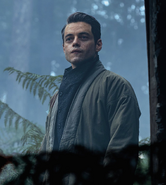 Safin in his broken mask on the frozen lake.