James Bond Wiki
Register
Don't have an account?
Sign In
Advertisement
in: James Bond characters, Film characters, A View To A Kill characters,
and 9 more
English

Head of security for the Zorin Industries

"It's time to flood the fault."
― Scarpine helping Max Zorin in finalizing their plot.[src]

Scarpine was a fictional enforcer and head of security for the illicit business dealings of billionaire industrialist, Max Zorin. A major antagonist portrayed by Belgian actor, Patrick Bauchau, the character first appeared in the 1985 James Bond film, A View to a Kill and was subsequently adapted for the 1983-87 tabletop role-playing game, James Bond 007: Role-Playing In Her Majesty's Secret Service.

Scarpine is first seen overseeing security checks during Zorin's thoroughbred sales of the horses at his French residence, the Château de Chantilly. British secret agent Sir Godfrey Tibbett arranges an invitation for his colleague, James Bond, who attends under the cover of a wealthy aristocrat named James St. John Smythe. Scarpine escorts 007 to the main stables to observe the preview which is in progress. He is subsequently seen with an aide spying on the guests' bugged rooms. Scarpine later attends the evening reception in the chateau gardens. As Bond begins to question the guests (notably, Stacey Sutton), Zorin takes Scarpine and his mistress May Day aside and issues instructions to have security watch him. That night, 007 and Tibbett investigate a secret laboratory under the stables; revealing that Zorin has been remotely administering illegal horse steroids during races and is hoarding microchips. Scarpine accompanies Zorin and Dr. Mortner to the lab, where they confirm the break-in and the following morning he brings Bond to Zorin's office. Unaware his cover has been blown, Bond participates in a deadly steeplechase race against Zorin. 007 escapes the circuit and comes across Tibbett's car, but discovers that it is being driven by May Day, who has murdered him. Scarpine knocks out the spy and bundles him into the back alongside the corpse. He collects Zorin and May Day after they dump the car in a lake. Scarpine later bursts in to reinforce Zorin during an unscheduled meeting with his former KGB superior, General Gogol.

Scarpine subsequently travels to San Francisco and colludes in Zorin's plan to cause an artificial double-earthquake; permanently submerging Silicon Valley underwater and granting Zorin Industries a monopoly in microchip production. During the scheme, Scarpine oversees security at Zorin's San Francisco Bay oil pumping station. When 007 unintentionally sabotages one of the intake pumps with his scuba equipment, Scarpine's security men uncover additional KGB spies; one of whom is thrown into the unclogged pump propeller. Scarpine later accompanies Zorin to the City Hall, where he assists in torching the building; trapping 007 and Sutton inside and incriminating them for the murder of Zorin's associate, W.G. Howe. At an abandoned mine beneath the lakes along the Hayward and San Andreas faults, Scarpine assists in moving 50 lb sacks of ANFO in a bid and secretly plants a detonator in one of the mine-shafts alongside the unaware miners. Zorin detonates it, and during the ensuing flooding, Scarpine aids the psychopath in shooting the fleeing men. Taking refuge on an airship, Scarpine, Zorin and Mortner await the upcoming cataclysm. However, the primary bomb is extracted from the geological lock by 007 and May Day, who sacrifices herself to save Silicon Valley as revenge against Zorin for betraying her and her friends. Their plans foiled, the trio descend and kidnap Sutton. Bond clings onto the craft's mooring ropes, eventually culminating in a showdown atop the Golden Gate Bridge. After Bond sends Zorin falling to his death in the bay, Scarpine (who was previously knocked out by Sutton) watches as Mortner ignites a stick of dynamite to kill Bond to seeking revenge on the spy for killing his adoptive son. However, the spy cuts the mooring rope attaching the blimp to the bridge, causing the airship to jerk violently away. Mortner drops the explosives on the floor, and as the pair fumble to grab it, it detonates in the airship, killing both Scarpine and Mortner.

In the tabletop role-playing game, Scarpine is described as a 26 year old, unintelligent hired thug, standing at 5'8" tall, and weighing 165 lbs.[1] His family was connected with organized crime in Italy, resulting in the ruling "family" executing all the members of his "family". The sole-survivor, he carries an ugly scar on his left cheek as a souvenir of his escape.[1] As a teenager, he managed to flee to France, where he tried to eke out a living as an itinerant grape crusher.[1] His youthful interest in horses finally landed him the job as a groom at Zorin's chateau. Since then, he has become Zorin's muscle for "jobs too boring for May Day".[1] Scarpine is very quiet, but has a very explosive and violent temper when wronged or wounded. He is ruthless and full of cunning when in a fight. At other times, however, his lack of native intelligence causes Zorin some embarrassment, and is on the verge of unemployment. Consequently, in the role-playing game, Scarpine is unaware of Zorin's plans.[1]

Scarpine seemed to have an unassuming personality, being unquestionably loyal to Zorin. While he did seemed to give the appearance of a rather unintelligent man, he seemed devoid of the psychosis that ultimately ruined Zorin, and was emotionally stable and astute enough to see that Dr. Mortner's attempt to kill Bond with dynamite was a rash decision and attempted to stop Mortner, albeit unsuccessfully. Scarpine's overall personality seemed to suggest he had something which Zorin and Mortner ultimately lacked: common sense. Scarpine was a seldom case where a villanous character was killed by another villain indirectly; Mortner had been responsible for Scarpine's death, although not out of hatred for Scarpine, but through his gross negligence by lighting dynamite in an airship in flight. 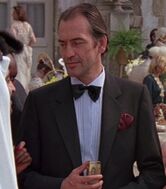 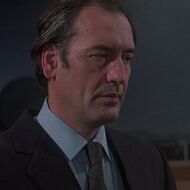