Secret Cinema Presents: Casino Royale was an immersive theatrical experience produced by Secret Cinema, under license from Danjaq and Metro-Goldwyn-Mayer. The experience combined film screenings of Casino Royale (2006) with interactive performances in purpose-built bespoke sets based on the film.

The event officially opened at Londoneast-uk Business and Technical Park in Dagenham, East London on 5th June 2019[5] and ran until 6th October 2019.[6] Later running from 23rd November 2019 in Shanghai, the show marked the company's first international expansion into China, in collaboration with SMG Live.[8] As of September 2019, the attraction drew record-breaking crowds of over 120,000, with an audience of 1,500 taking part in the show each night; making it the largest and most ambitious production Secret Cinema had ever produced.[8][9]

In the lead-up to the event, audience members are sent teaser emails and are granted access to a website database themed around SIS's cover organization, Universal Exports. As part of the experience, audience members are recruited by the Secret Intelligence Service (SIS/MI6) to participate in the fictional "Operation Wild Card", and are assigned a department within SIS with a unique role and color. Falling under "Q Branch" are cyber (purple) and surveillance (red), with the remainder - field comms (green), intelligence analytics (turquoise), diplomatic relations (blue) and control (gold) - "M Branch".[10] Each role represented a separate story-line for audience members to participate in; dividing up and channeling the hundreds of participants into specific locations and activities. The attendees choose a cover identity with the initials "JB" (for example, "Jasper Benedict") and are encouraged to formally dress and act in character. Several weeks prior to the event, participants are given partial details to the location; namely the nearest tube station.

Upon arriving at the venue, attired in their department color, audience members walk along a red carpet (painted) and are briefed by an SIS agent holding a bouquet corresponding to their color. Outside the venue was a themed photo-booth, along with a bar and the wrecked Aston Martin DBS V12 from the film. Phones and recording equipment were prohibited inside the building and were sealed away for the duration of the event. All participants enter the building to attend the grand reopening of the eponymous Casino Royale. During the reception, a staged raffle is held, culminating in the unexpected murder of the winner. Amid alarms, the audience are hastily ushered into an arena with various purpose-built bespoke sets based on the film. Areas replicated from the film included Madagascar, The Ocean Club, Miami International Airport, Venice, the Lahore bathroom, the SIS Building, and the Casino Royale itself. The audience can then choose to role-play their assigned mission, interacting with actors representing the various characters from the film.[11] The overarching plot is to compete to intercept a briefcase containing currency. As a security precaution, nine other decoy cases are dispatched, and it is the goal of the participants to discover which contains the money.

After the interactive pre-show concludes, participants are ushered into the auditorium, where Casino Royale is screened alongside immersive elements such as actors mirroring on-screen events and an Aston Martin DB5[11][12]; blending theatre, special effects and film.[7] 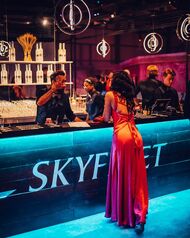 Solange at the Skyfleet bar in MIA (promotional image) 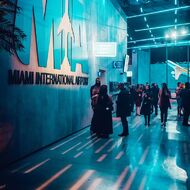 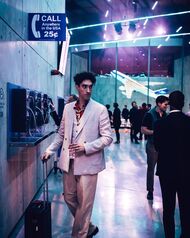 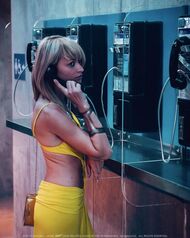 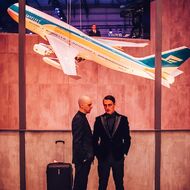 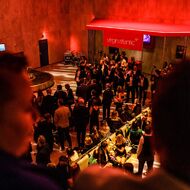 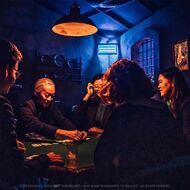 Fukutu at the Poker table in Venice (promotional image) 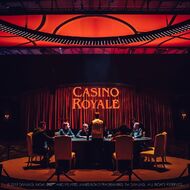 Retrieved from "https://jamesbond.fandom.com/wiki/Secret_Cinema:_Casino_Royale?oldid=92315"
Community content is available under CC-BY-SA unless otherwise noted.