Sergeant Stagg is the loyal henchman of arms dealer Brad Whitaker. He is first seen when KGB head General Pushkin pays an unscheduled visit to Whitaker's Tangier villa in Tangier, Morocco. Stagg greets Pushkin at the door, leaving him in the company of Whitaker's eccentric collection of military waxworks, whilst he goes to find 'the chief'. As the arms dealer's aide, he is seen throughout the film adhering to pseudo-military regimen and carrying out Whitaker's menial tasks; such as summoning General Koskov and Necros from the pool. He is last seen during James Bond's raid on the villa. After Whitaker is killed by the spy, Stagg abruptly bursts into the room and attempts to avenge his death; but he is unexpectedly shot dead by Pushkin, saving Bond. 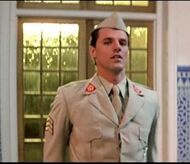 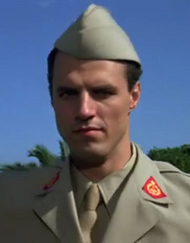 Retrieved from "https://jamesbond.fandom.com/wiki/Sergeant_Stagg?oldid=97945"
Community content is available under CC-BY-SA unless otherwise noted.