www.shanerimmer.com
Shane Rimmer was a Canadian actor who played different characters across multiple Bond films. His first role in the series was as an unnamed American launch controller in You Only Live Twice. He later provided the voice of Hamilton (played onscreen by Robert Dix) in Live and Let Die.

His last and longest role in the franchise was in the 1977 entry The Spy Who Loved Me, where Rimmer played CMDR Carter of the USS Wayne. Carter was a fan favorite, but the role for which he was best known was undoubtedly his voicework for the 1965 cult TV series Thunderbirds and, later, its first two films, Thunderbirds are Go and Thunderbird 6. Rimmer's main character in the series, Scott Tracy, was at least party based on Sean Connery's tenure as James Bond. His short exchange with Mark Hamill's Luke Skywalker in the original Star Wars (released in 1977, the same year as The Spy Who Loved Me) also marked the actor as a fan favorite.

Shane Rimmer passed away in 2019 at the age of 89. His last completed role was in the Cartoon Network series The Amazing World of Gumball. He is also listed as having completed voice work for the unreleased puppet-animation film Firestorm, set in the Thunderbirds universe and directed by Steven Begg, the visual effects supervisor for all the Craig-era Bond films. 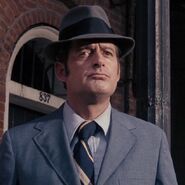 CMDR Carter
Add a photo to this gallery
Retrieved from "https://jamesbond.fandom.com/wiki/Shane_Rimmer?oldid=100969"
Community content is available under CC-BY-SA unless otherwise noted.