SilverFin is a single-player isometric adventure video game that was developed by Morpheme and published by PlayerOne for mobile phones. Released in 5th January 2006 for Java-capable handsets, the game was based on Charlie Higson's 2005 Young Bond novel of the same name and coincided with the release of its sequel, Blood Fever.

Following the plot of SilverFin, the first five levels revolve around recovering a train ticket sent by James Bond's aunt Charmian with the help of his friend, Pritpal Nandra. However, it has been split up into four parts and hidden around the school. Having recovered the pieces, Bond then travels to Scotland and makes a new friend, Red Kelly. With his help, Bond has been able to gain access to Lord Hellebore's castle set on Loch SilverFin. The boys investigates further and make their way down through the floors of the castle to unravel the secrets it holds. With the help of Hellebore's son, George, Bond makes his way past guards and mutant pigs to a secret laboratory producing a mutagen: the Silverfin Serum. The game concludes with Bond destroying tanks of serum and escaping the castle as it is engulfed in fire.

Developed for Java-equipped handsets, SilverFin is an isometric adventure game in which the player controls the young James Bond. The player progresses by pushing obstacles, finding keys to open doors and collecting items; all whilst avoiding patrolling enemies. If a guard sees the player they are given one of three warnings that will be shown on the bottom of the screen. If they are seen three times they will have to start the level again. Warning indicators briefly flash to show a guard is nearby. Later levels include objects which instantly kill on touch, including mutant pigs and fire. The game features three locations (Eton, Hellebore's castle and his laboratory) over 15 levels. At the end of each level the player's performance is graded as either "Young Etonian", "Young Adventurer" or "Young Bond" (best).

Reviewing the game, John Thomson of Pocket Gamer scored the game 4 out of 5. While noting that levels could become slightly repetitive, he praised the game for its clearly structured menus and colourful visuals.[1] 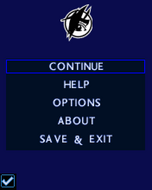 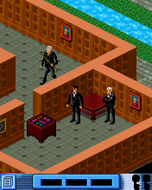 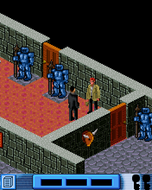