Slaven Kurjak was the primary antagonist of the 2015 James Bond Comic VARGR.

After growing up as a staff member of the Serbian concentration camps and loving the feeling that experimenting on others made him feel, Slaven began working with like minded individuals to cause pain to others while working as a medical scientist in the field of cybernetics. Slaven gained expertise in this field due to the need to regain use of his left arm after it was disabled.

He later founded Kurjakmedizin in Germany, and used it to create a type of drug that would disintigrate the user from the inside out, and infect people around the user. However he did produce high end cybernetic limbs, and was referred to as an informant by Felix Leiter to James Bond. Not wanting to face investigation, Slaven sent Dharma Reach to commandeer the car on the way to pick up the agent at the airport, and had her pose as an agent herself, but Bond saw through the first ruse and escaped. When Bond arrived at Kurjakmedizin for information, Slaven directed him to a Lebanese street gang called the Al-Zein, who were distributing cocaine, and had Dharma tail him to make sure the gang killed him. Much to Slaven's surprise, Bond survived, and he was forced to send Bryan Masters to MI6's Berlin Station to eliminate him there, but he was not at the station at the time of the mission.

Slaven then found Bond and Masters locked in an examination room at Kurjakmedizin, and explained his plan to Bond in order to stall him while the room entered a fatal decontamination cycle. Kurjak then left Bond for dead and traveled to his mobile laboratory for developing his drug, the decommissioned HNoMS Vargr in Norway. While on the boat, he noticed that Bond was aboard and quickly left his workers to save himself from the assassin. after swimming ashore and ruining his hydraulic mesh arm, he was asked by Bond why he felt the need to do what he did, to which a delirious Kurjak responded that he wanted to do "beautiful things" with his friends. He was then shot and killed. 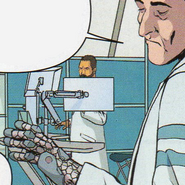 Kurjak's hand
Add a photo to this gallery
Retrieved from "https://jamesbond.fandom.com/wiki/Slaven_Kurjak?oldid=84781"
Community content is available under CC-BY-SA unless otherwise noted.