Smithers is a fictional laboratory assistant in the employ of the British Secret Intelligence Service's (SIS/MI6) research and development division, Q Branch. A minor recurring character portrayed by late British actor, Jeremy Bulloch, he first appears in the 1981 James Bond film For Your Eyes Only and subsequently in 1983's Octopussy.

He makes his first appearance in Q Branch's London workshop during For Your Eyes Only. When James Bond arrives to use the Identigraph machine, Smithers and Q are in the middle of testing an arm cast, which flips out and crushes the head of an adjacent dummy. The character later reappears when following Afghan prince Kamal Khan after the auction of the Fabergé egg during the events of Octopussy[1]. Smithers is later seen a Q Branch workshop in India. He tests a spiked doorway, cautiously pulling the knocker using a fishing line, which subsequently triggers the device and crushes a dummy.

In addition to his minor recurring role as Smithers, actor Jeremy Bulloch's first role in the 007 series was as an crewman aboard the HMS Ranger named A. C. Andrews in the 1977 film The Spy Who Loved Me. In a career spanning over half a century, the actor is most famous for his role as the bounty hunter Boba Fett in the Star Wars films The Empire Strikes Back and Return of the Jedi."[2] Additionally, he plays a minor role as an Imperial officer (later identified as Lieutenant Sheckil), who grabs Leia when she warns Luke Skywalker of Vader's trap in The Empire Strikes Back.[3]

In the Marvel Comics adaptation of Octopussy, the agent who follows Kamal Khan is referred to as 'Zec'. Perhaps Zec is Smither's first name, or possibly a nickname for him used by 007. 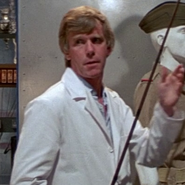 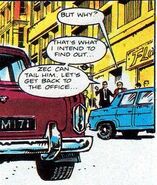 "Zec can tail him"
Add a photo to this gallery

Retrieved from "https://jamesbond.fandom.com/wiki/Smithers?oldid=98113"
Community content is available under CC-BY-SA unless otherwise noted.