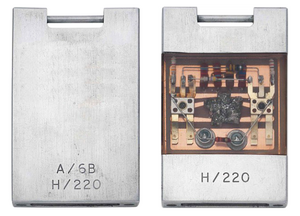 The solex agitator is a small component made by a British scientist named Gibson. Gibson created this device to harness solar energy as a solution to the 1973 energy crisis. It only appeared in the film The Man with the Golden Gun serving as a McGuffin-style plot device.

The solex agitator appeared in the film adaptation of The Man with the Golden Gun. A scientist named Gibson created the solex as a component to solar energy device as an answer to the energy crisis. James Bond's mission is revolving Gibson's work, thought to be in possession of a solution to the energy crisis until M relieves Bond from his mission after MI6 receives a golden bullet with Bond's code "007" etched on the surface.

Bond's search for Francisco Scaramanga leads to Hong Kong where Scaramanga would assassinate Bond but it was actually Gibson and Nick Nack steals the solex for Scaramanga to hand it to wealthy Thai entrepreneur, Hai Fat. Later Scaramanga killed Fat and takes the solex.

Anders takes the solex as a payment for Bond to kill Scaramanga and plan to meet Bond at the boxing venue. The next day, Bond discovers Anders dead and meets Scaramanga. Bond spots the solex on the floor and secretly hands the unit to Lt. Hip and he hands it over to Mary Goodnight. As she is attempting to put a homing device to Scaramanga's car, she is locked in the boot. Bond chased after Scaramanga but Scaramanga got away.

Upon arriving on Scaramanga's island, Bond is welcomed by Scaramanga and he showed Bond his high-tech solar power plant and he plans to sell it to the highest bidder. He demonstrated Bond a solex powered laser by destroying his plane.

After Bond killed Scaramanga, Goodnight knocks the maintenance man into a pool of liquid helium causing an upset of the solar plant's balance. Bond manage to retrieve the solex unit and he and Goodnight manage to escape the exploding island on a Chinese junk.