James Bond Wiki
Register
Don't have an account?
Sign In
Advertisement
in: James Bond characters, Film characters, A View To A Kill characters,
and 8 more
English

Stacey Sutton is a fictional State Geologist employed by the State of California. An ally and primary Bond girl, the character first appeared in the 1985 James Bond film A View to a Kill, played by American actress Tanya Roberts. Additionally, the character appeared in its accompanying interactive fiction video game James Bond 007: A View to a Kill, and was subsequently adapted for the 1983-87 tabletop role-playing game James Bond 007.

Stacey Sutton was the granddaughter of an oil tycoon in California, who had passed the oil business onto his son. As the only child and heir apparent to the family business, Stacey majored in earth science in college, with the expectation her father would then guide her into how to be president of the company. Unfortunately, shortly after finishing her education her father passed away, and she had little chance to effectively control the company. Sutton Oil was taken over by billionaire Max Zorin, who gave Sutton a cheque for $5,000,000 for her shares in the company, although she never cashed it. Stacey lives on the estate her grandfather left for her Dunsmuir House. Because of her protracted legal battles with Zorin she has sold much of the house's furnishings.

James Bond eventually discovered that Zorin was pumping sea water into oil wells to flood the Hayward and San Andreas faults in order to create a double earthquake that would submerge Silicon Valley. Bond follows her from her work and she knew he was following her and when she went in, she managed to fool him into thinking she was taking a shower and held him at gunpoint with a shotgun. While trying to call the police, she discovers her line was cut and accused Bond of cutting it, but when one of Zorin's men tried to come in through a window, Bond grabbed the gun and shot the goon off her deck and used it to shoot at the men, but soon discovered she loaded the gun with rock salt blanks and helped him by blinding one of the men with her grandfather's ash urn and Bond soon picked up the shotgun and fired at the men to scare them off.

The next morning, Stacey and her boss W.G. Howe argued about Zorin and he had no choice but to fire her and apologizes. After talking with Bond's contact, CIA agent Chuck Lee, they sneak into the government building and try to find info about Zorin, but are caught by Zorin and May Day, who swipes Bond's gun and hands it to Zorin Howe to frame Bond and traps them in the elevator. After escaping the building, the police captain questions them and were informed that Lee was found dead and they attempt to arrest them, despite Bond revealing his true identity "throughout the film, she thought he was James Stock," but they escape using a fire truck.

In an attempt to prevent Zorin's scheme, the pair infiltrate one of Zorin's mines. Zorin succeeds in detonating explosives which drain the lake above and cause the mine to flood. Most of Zorin's own men and women don't survive, but Stacey luckily escapes the rising waters. Enraged at Zorin's betrayal, May Day helps Bond foil her former lover's plans by moving the primary explosive device out of the mine shaft which kills her when it detonates. His plan ruined, an angry Zorin and his entourage attempt to escape by airship - taking a newly kidnapped Stacey with them.

Grabbing hold of the airship's mooring rope, Bond takes to the air, eventually managing to snag the airship on the Golden Gate Bridge. As Bond and Zorin fight on the bridge itself, Stacey knocks out Scarpine and takes care of Hans Glaub. Watching Zorin fall to his death, Sutton leaves the airship and reunites with Bond on top of the bridge. However, Glaub regains consciousness and attempts to avenge Zorin's death by trying to kill the couple with a stick of dynamite. His plan backfires however, after Bond cuts the mooring rope causing the blimp to violently jerk away from the bridge. Glaub drops the dynamite and in the confusion both he and Scarpine are unable to grab it before it detonates.

The final sequence, Bond has believed missing. Q solves that problem by using one of his remote control gadgets to spot Bond and radio M that he has found 007 alive and well. Q's discovery is awkward, as his remote control animal spots Bond and Stacey bathing together. Bond, aware of Q's gadget from an earlier demonstration, tosses a towel over the animal, which obscures Q's spying. 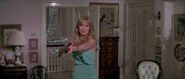 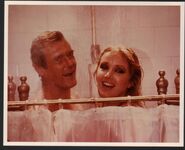