Strawberry Fields was a fictional intelligence operative working for the British Secret Service and affiliated to the British consulate in Bolivia. The character was the secondary Bond girl in the 2008 James Bond film, Quantum of Solace, and was portrayed by British actress, Gemma Arterton.

When James Bond takes it upon himself to work away from orders, following Dominic Greene to Bolivia, Fields is assigned the job of stopping Bond, turning him around and putting him back on the first plane back to London.

Waiting for Bond and his ally René Mathis at La Paz airport, Fields is quick to assert herself over the British MI6 agent. However, Bond still feels he can take advantage due to her younger age. Shooting down Bond's sarcasm, Fields threatens to leave Bond in jail over night until their flight back to London the following morning. Bond doesn't hesitate to argue against Fields' threats. However, he tells her they still have "all night".

Getting a taxi to a cheap hostel, Fields informs Bond and Mathis that they are undercover as teachers on sabbatical. Bond demands that she gets back into the taxi, which she does after a second thought. Bond then checks the three into the Andean Grand Hotel, a five-star resort in the city center of Bolivia. When paired in a room with Bond, she succumbs to his charms and sleeps with him.

Feeling guilty about sleeping with Bond, Fields tells him she doesn't think she can ever forgive herself. Working his charms once again and trying to cheer her up, Bond offers to take her to a party Mathis has recently got invited too, the host of which being Dominic Greene. Fields agrees to the offer and the pair travel together.

While at the party, Bond and Fields watch Greene's environmentally targeted speech and are introduced to Colonel Carlos, the Bolivian Chief of Police, who is secretly a double agent working for the corrupt General Medrano. When Bond leaves Fields with Carlos and Mathis, she keeps a watchful eye on Bond's movements. Noticing tensions rising between Bond, Camille Montes and Dominic Greene, she decides to confront, but as she walks up the stairs, she realizes she must make a choice: still work to order and stop Bond from leaving with Camille or help Bond on his quest by allowing him to leave. Choosing the latter, when Greene orders his henchman Elvis to follow Bond and Camille, Fields trips him up down the stairs, allowing Bond to flee but drawing attention to herself.

Death at the Andean Grand Hotel

Sometime after leaving the party, Fields clearly knows she is being followed by Greene's henchmen. After leaving a note at the reception of the hotel for Bond saying "Run!", Fields' fate is soon cemented when she is discovered by M lying naked on the bed in the hotel room, her dead body covered in oil. When Bond arrives back, he tells M that the use of oil is misdirection from Greene as he is in fact planning on controlling Bolivia's water supply. Managing to break free from M's guards escorting Bond from the premises, the spy confronts M, telling her that Fields showed true bravery and he demands to see that act written in her final report.

In an act of poetic justice at the end, Bond leaves Greene stranded in the middle of the desert with nothing but a can of engine oil to drink.

Director Marc Forster found Arterton a witty actress and selected her from a reported 1,500 candidates. One of the casting directors asked her to audition for the role, having seen her portray Rosaline in Love's Labour's Lost at the Globe Theatre.[1] Arterton said Fields was "not so frolicsome" as other Bond girls, but is instead "fresh and young, not ... a femme fatale."[2] Arterton described Fields as a homage to the 1960s Bond girls, comparing her red wig to that of Diana Rigg, who played Tracy Bond in On Her Majesty's Secret Service. Rigg, alongside Honor Blackman, is one of her favourite Bond girls.[1]

Arterton had to film her character's death scene first day on the set, where she was completely covered head to toe in non-toxic black paint. Although she found the experience unpleasant, she believes the scene will be an iconic part of the film.[3] The character's first name, which is a reference to the Beatles song "Strawberry Fields Forever" and the places in both Liverpool and New York with the same name, is never actually uttered on screen; when Bond asks her for her name, she replies, "Just Fields." Author Robert A. Caplen suggests that this is a conscious effort to portray a woman "whose character attributes are neither undermined nor compromised" by her name, even though her name may have sexual overtones reminiscent of earlier A View to a Kill. 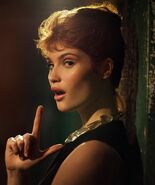 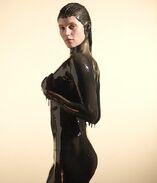 Retrieved from "https://jamesbond.fandom.com/wiki/Strawberry_Fields?oldid=96319"
Community content is available under CC-BY-SA unless otherwise noted.