Tatiana "Tania" Romanova (In Russian: Татьяна Романова) is a fictional Soviet army corporal who acts as a bait in a plot to exact revenge on James Bond. Portrayed by Italian actress, Daniela Bianchi, and voiced by the late British actress, Barbara Jefford, Tatiana was based on the character of the same name from Ian Fleming's 1957 novel From Russia with Love. She serves as the main Bond Girl from the 1963 film of the same name. The character would later be re-imagined for Electronic Arts' 2005 video game adaptation of the film, voiced by American voice actress, Kari Wahlgren, with the likeness of Bianchi. Tatiana was ultimately re-imagined for the 2015 mobile game James Bond: World of Espionage.

A corporal in Soviet Army Intelligence, Tatiana Romanova is assigned to work in the Soviet Embassy in Istanbul, Turkey, as a cipher clerk. She originally was a ballerina, but had to abandon her goal of dancing for the Bolshoi Ballet when she grew one inch taller than the maximum height permitted for girls. She has a number of friends and is very popular, though she has been more reserved in her relationships with men, having only taken three lovers.

She likes the look of James Bond, and when she sees him face-to-face she comments, "You're even nicer than your photograph", to which 007 replies "You're the most beautiful girl I have ever seen."

Her commanding officer is Colonel Rosa Klebb — in the screenplay adaptation, she is secretly an agent for SPECTRE — who manipulates her into believing that she is on an important mission for her country, when she is in fact merely a pawn in the terrorist organization's latest bid to humiliate and scandalize the British Secret service.

As with the novel, Romanova is a very dedicated woman, loyal to her country and eager to participate in what she believes is an important mission. She does, however, hesitate when she is required to meet Colonel Klebb, a mean and wicked woman who loves to play with the psyches of her prisoners by torturing them and then, when lost in pain, caressing them in a motherly way. Romanova fears Klebb and suffers when she reports to her for the first time, where she is interrogated by Klebb. After being told that her life depends on accepting the mission, she receives her briefing, a "true labor of love", according to Klebb.

Once in Istanbul, she contacts Ali Kerim Bey and tells him her plans: she would willingly defect from the Soviet Union and take with her the precious Lektor only if James Bond assisted the operation. She claimed that she had fallen in love with the man from a picture she had seen in a secret file and wanted to live with him.

Both M and Bond believe this to be a trap, but the prize was high enough to go for it. They react just as the main brain behind the plot, chess champion Tov Kronsteen, predicted. Bond then flies to Istanbul and contacts Bey. While they wait for the girl to show up, they spy on the Soviet headquarters and become involved in a racial dispute between a Gypsy tribe commanded by Vavra, and a gang of Bulgarian thieves lead by Krilencu, an old enemy of Bey.

After the battle at the camp, Bond returns to his hotel room and finds Romanova walking naked across the room and getting into his bed, wearing only a black velvet choker. They make love but are secretly filmed by Klebb's minions via a one-way mirror. This tape is explicitly planned to be used to embarrass MI6 and humiliate Bond in revenge for the death of Dr. Julius No.

After meeting her again to verify the authenticity of her information, they blow up the Soviet embassy in Istanbul to cover their escape. With the help of Bey, they board the Orient Express and depart for Trieste and the Italian frontier. As a part of Kronsteen's strategy, the SPECTRE assassin Donald 'Red' Grant kills Bey and the Russian agent following them.

Bond contacts Grant, who is pretending to be an agent named Nash. After sedating Romanova, Nash's identity is revealed to Bond, who then fights Grant in their train room. Bond finally kills the murderer and manages to take Romanova to Venice, Italy. It is there they meet Klebb again who, in an attempt to retrieve the Lektor and kill Bond, disguises herself as a maid and tries to eliminate the agent with a dagger-tipped shoe poisoned with blowfish venom after she disarms Klebb and picks up the gun.

Romanova is torn between her orders to shoot Bond and her feelings for him; in the end, she turns on Klebb and shoots her dead, ultimately saving the day. Bond and Romanova soon look at the tape before Bond soon tosses it in the ocean.

The character's role in the video game adaptation of From Russia with Love is more or less the same as in the novel and film, with the only major difference being that she is now an unwitting double agent for a terrorist organization called "Octopus". She is voiced by Kari Wahlgren.

Several actresses were considered for the role of Tatiana, including Italians Sylva Koscina and Virna Lisi, Danish actress Annette Vadim, and English-born Tania Mallet.[1] 1960 Miss Universe runner-up Daniela Bianchi was ultimately cast, supposedly Sean Connery's choice. Bianchi had long blonde hair at her audition, another reason for her being chosen for the role, but before filming she cut her hair short, not knowing that this would upset director Terence Young.

Bianchi started taking English classes for the role, but the producers ultimately chose to have her lines redubbed by British stage actress Barbara Jefford in the final cut.[2] The scene in which Bond finds Tatiana in his hotel bed was used for Bianchi's screen test, with actor Anthony Dawson standing in, this time, as Bond.[3] The scene later became the traditional screen test scene for prospective James Bond actors and Bond Girls.[4][5] During the filming of From Russia with Love, Bianchi's driver fell asleep during the commute to a 6 am shoot and crashed the car. The actress's face was bruised and Bianchi's scenes had to be delayed for two weeks while the facial contusions healed. One of a series of problems for the production, only a few days prior director Terence Young's helicopter had crashed while scouting locations in Argyll, Scotland. [3] 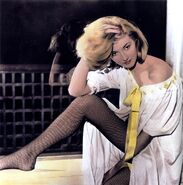 Promotional image of Tatiana, from the video-game From Russia with Love (2005). 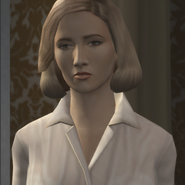 Tanya in the Video game adaptation