Corporal Tatiana Alexeievna Romanova is a fictional Soviet corporal and SMERSH honeytrap, who was used by the organisation in their conspiracy against James Bond and the British Secret Service. The character appears in the 1957 Ian Fleming novel From Russia, with Love and was subsequently adapted for the 1963 EON Productions film of the same name, as well as several other portrayals.

Tatiana "Tania" Romanova is introduced as a Soviet corporal in the English translation section of the Ministry of State Security (MGB) Central Index. Her superiors, in connection with a SMERSH, plan to sow dissent in the intelligence community by murdering and discrediting a significant figure in western intelligence. This was to be achieved by the murder of James Bond. Placed under the authority Colonel Rosa Klebb of Otdyel II, the execution department of SMERSH, she is manipulated into believing that she is on an important mission for her country, when she is in fact merely a pawn in a conspiracy which will result in her own death. Klebb assigns her the mission of seducing Bond, convincing him to bring her and a Spektor cipher machine to England on the Orient Express. There she was to plant false information, before being rescued from a political prison and returned to Russia.

Subsequently, she is transferred to their Istanbul centre as a cipher officer and contacts the head of the Secret Service's Turkish station, Darko Kerim. Tania informs him that she had engineered the transfer to Istanbul in a bid to meet Bond, whom she has allegedly become besotted with after reading his intelligence file. She offers to bring her Spektor machine with her if 007 helps her defect to the West. Taking the bait, Bond is sent to Istanbul and contacts Kerim, spending several days there, waiting for contact. After a riot at a Gypsy camp, Bond returns to his hotel room and finds Romanova naked in his bed, wearing only a black velvet choker and stockings. They make love, but are secretly filmed by Klebb's minions via a one-way mirror. This tape is explicitly planned to be used to embarrass MI6.

Tatiana dissuades Bond from taking her to Britain by plane, insisting instead on the Orient Express as ordered. This choice makes Bond uneasy, but he likes Tatiana and decides to indulge her; continuing to do so even after Darko Kerim is murdered by an MGB operative on-board the train. Travelling as Mr and Mrs David Somerset, the pair are approached by SMERSH assassin Red Grant, posing as British operative, Captain Norman Nash. Romanova, unaware of his true identity, takes an immediate disliking to the man and is suspicious of his name, which in Russian means "ours"; a term used in Soviet intelligence when an operative is one of 'their' men. During dinner Nash sits beside the girl and clumsily (but intentionally) knocks over Tatiana’s glass of Chianti and spikes her replacement drink with chloral hydrate. Nash brings the drugged girl back to Bond's compartment and agrees to share guard duties in their stateroom. However, the next morning he allows his identity to be known and reveals SMERSH's plan to stage a murder-suicide by killing the couple and planting a forged blackmail letter along with the footage of their lovemaking at the Kristal Palas. The standoff culminates when Grant is shot to death by Bond. 007 informs the conductor that Tatiana is ill and he drags the girl to her feet, leaving the train at Dijon. Tatiana was last mentioned sleeping in a bedroom at the Embassy.

A Romanov, her grandparents were distantly related to the Imperial Family; a fact which concerned SMERSH's chief planner, Kronsteen. While possessing an aristocratic lineage, Tatiana is noted for her complete and unquestioning obedience to the Soviet State. Physically, she bore a strong resemblance to a young Greta Garbo, with a wide mouth and dark brown hair intentionally styled after the Swedish-born actress. She was kept in peak physical condition by her love of figure-skating and ballet, the latter of which she had to abandon as a career only when she grew an inch over the prescribed limit of five feet six. Described condescendingly by Rosa Klebb as 'prudish' and 'sexually unawakened', Romanova had three lovers prior to her assignment to seduce Bond, the names and addresses of whom, along with relatives, including children, were collected by Klebb to be used as bargaining chips if the corporal should prove uncooperative. 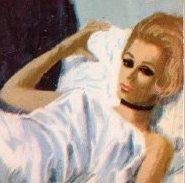 Tatiana on a 2003 Penguin Publishing edition

Retrieved from "https://jamesbond.fandom.com/wiki/Tatiana_Romanova_(Literary)?oldid=99088"
Community content is available under CC-BY-SA unless otherwise noted.