Ginger, short with a centre-parting

Doctor: "How does it feel now? "
Chameleon: "Perfect. Though I prefer my face to yours!"
―From the episode The Chameleon.[src]

The Chameleon is a fictional shape-shifting thief associated with the criminal organization, SCUM. A reoccurring antagonist voiced by American actor, Alan Oppenheimer, the character appeared in the 1991-92 animated television series, James Bond Jr; beginning with episode three, "The Chameleon".

His real name unknown, the freelance criminal-for-hire known only as "The Chameleon" underwent surgery to implant a series of "micro-moulders" under his skin; allowing him to alter his physical appearance at will. The implants come at a cost, however, as sustained exposure to water can short out their master circuit, resulting in the individual painfully losing control over the properties of his skin, eyes, and hair. In his final appearance, an accomplice crafts an "illusion suit" suit for the Chameleon, allowing him to not only change the appearance of his morphology - but also his clothing.

The surgical procedure was initially used in his scheme to pose as a U.S. Army General; using his authority to steal their prototype exoskeleton suit and sell it to the criminal organization, SCUM. He first encounters James Bond Jr. in the company of a lieutenant, Shelley Kaysing, who was sent to warn the Pentagon. At the Washington Monument, in the guise of an old lady, he attempts to murder them both by defenestration. He gains access to the R.A.T.S. prototype at the Pentagon's testing range and is ultimately thwarted by the intervention of Bond and Lt. Kaysing. After accidentally triggering the building's fire suppression system, water pours into the vehicle; shorting out his subdermal implants.

After escaping from custody, Chameleon is later employed by Dr. Derange to impersonate a Soviet space chief and hijack their Red Star One space station; planning to use its super-laser to break into the Russian treasury and steal its contents. After making a failed assassination attempt on Bond's life at a space-rocket launch site, the Chameleon and his accomplices are pursued to the treasury bunker. They cut their way inside using the laser, but are ultimately overwhelmed and are apprehended by the Russian authorities. Subsequently, Chameleon escapes incarceration for a third and final time. Desperate to prove his value to SCUM Lord and gain access to the organization, he teams up with magician, Lex Illusion, to rob Parisian art galleries and museums. Chameleon attempts to frame Bond for the thefts, while he targets the Louvre. Lex and Chameleon attempt to move the priceless art via a subway train, but are re-routed away from their rendezvous with SCUM by the French authorities. He is taken into custody. 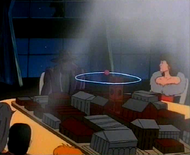 Possible final appearance of Chameleon, as seen in Episode #40 "Barbella's Big Attraction".
Add a photo to this gallery

Retrieved from "https://jamesbond.fandom.com/wiki/The_Chameleon?oldid=90460"
Community content is available under CC-BY-SA unless otherwise noted.