"Stuff my orders! I only kill professionals. That girl didn't know one end of a rifle from the other. Go ahead. Tell M what you want. If he fires me, I'll thank him for it... Whoever she was, I must have scared the living daylights out of her."
― James Bond to Saunders —

The Living Daylights is the fifteenth film in the James Bond film series produced by EON Productions, released in 1987, and was the first of two films to star Timothy Dalton as the fictional MI6 agent James Bond. It is also the first Bond film to have Caroline Bliss as Miss Moneypenny, replacing Lois Maxwell. The story was inspired by Ian Fleming's eponymous short story, first published in 1962. It was produced by Albert R. Broccoli, his stepson Michael G. Wilson, and Broccoli's daughter Barbara Broccoli. This was the last film to make use of an Ian Fleming story title until the release of Casino Royale in 2006.

In the prologue, three skydiving 00 agents are tasked with penetrating radar installations atop the Rock of Gibraltar as part of a Ministry of Defence training exercise. 002 is captured almost immediately upon landing by the SAS, while 007 and 004 start scaling the cliffs. As they ascend, an assassin sends a tag reading Smiert Spionom down 004's climbing rope before cutting it, sending the spy to his death. Bond witnesses the incident and gives chase to the assassin, ending in an explosives-laden Land Rover careening down Gibraltar's narrow roads and then into the air. Bond escapes with his reserve parachute while the assassin is killed when the Land Rover explodes in mid-air.

The early part of the film has much of the original short story's plot: Bond assists Saunders, head of Section V, in the defection to the West of a devious KGB General Georgi Koskov. Bond's part is to cover Koskov's intermission escape from a concert hall in Bratislava, Czechoslovakia. He notices that the sniper protecting Koskov is a beautiful cellist from the orchestra, Kara Milovy. She isn't holding the rifle properly. Suspecting she is not an assassin, he shoots the rifle out of her hands, sparing her life, whilst facilitating Koskov's escape from the hall.

In England, General Koskov informs MI6 that the KGB is being run by power-hungry General Pushkin. According to Koskov, Pushkin has revived the old policy of Smert Shpionam — literally, Death to Spies (SMERSH), a programme of Western spy assassinations — and as such Pushkin needs to be eliminated. This story is credible given the recent murder of Bond's partner in the Gibraltar training exercise. Shortly afterwards the KGB, in person of the assassin Necros, raids the safe-house where British Intelligence hide Koskov. After murdering a chef, he engages in a brutal fight with an agent in the kitchen and after knocking him unconscious, lobs grenades disguised as milk bottles at two guards, knocking them out, and lobs a second at another agent on the stairs, killing him. After briefly holding a stenographer and Koskov hostage, he snatches Koskov back East using the disguise of a doctor’s outfit and a Red Cross helicopter.

For his mission to kill Pushkin at a trade conference in Tangier, Morocco, Q supplies Bond with a new Aston Martin and an electric key-finder able to both release stun gas or explode. Bond doubts the Smert' Shpionam theory and begins suspecting that Koskov's defection and recapture were staged. He returns to Bratislava, posing to Kara Milovy as General Koskov's friend and discovers that Kara is in fact Koskov's girlfriend, who is observed by KGB. The pair flee to Vienna, Austria, in the weaponized Aston Martin, pursued by KGB and Czechoslovak Police (Veřejná bezpečnost or VB — Public Security). Bond, however, is forced to destroy the car, whereupon he and Milovy sled down a snow-covered hill in the Kara's cello case.

After the opera in Vienna Bond excuses himself from Milovy to meet Saunders in a café. Saunders has investigated Koskov's story and has discovered a tenuous link between him and a greedy arms dealer, "General" Brad Whitaker. Kara's Stradivarius cello, though bought by Koskov, was funded by him. The military enthusiast is merely a self-styled general, as he has been expelled from West Point for cheating, and has never served as a military officer. Whitaker has arranged to supply the KGB with Western high-technology weapons through Koskov, and the latter is attempting to deliver the down payment in diamonds. As Pushkin is investigating Koskov and cancels the arms deal with Whittaker, the pair wants him dead. Because Necros is known to the KGB, Koskov intends to deal with Pushkin by having the British kill him. Whitaker agrees but wants Necros to ensure that Pushkin is dead if Bond hasn't done so before the end of the conference.

As Saunders leaves the café he is killed by Necros, who detonates a bomb slamming the sliding door of the café onto Saunders. Necros leaves behind a balloon with the words Smert' Shpionam on it, unaware that Bond already suspects the true motives behind the trail of clues lain for him. Bond returns to Milovy, and they immediately leave for Tangier, Morocco.

Bond confronts Pushkin, who says the KGB deactivated Smiert Spionam in 1967, and that they had nothing to do with the recent deaths of the British agents. Pushkin also reveals that Koskov is actually guilty of embezzling Soviet government funds. This confirms Bond's suspicions that a third party is behind the plot. Bond and Pushkin decide to let Koskov progress with his scheme by faking Pushkin's assassination as he speaks at the convention, just seconds before Necros, who had also infiltrated the convention, could kill Pushkin. Bond escapes from the police and is picked up by Felix Leiter, who is observing Pushkin in Tangier.

Meanwhile Milovy contacts Whitaker's home and Koskov convinces her that Bond is a KGB Agent looking to kill him. She assists in capturing Bond for him, grasping too late that Koskov has fooled her and had intended her being killed in his defection. After being captured by Koskov, Bond and Milovy are flown to a Soviet air base in Afghanistan, at the height of Soviet occupation.

Imprisoned on arrival, they escape, helped by Bond's key-finder, and free a prisoner to be hanged the next day. The prisoner is Kamran Shah, leader of the local Mujahideen. Bond discovers that Whitaker and Koskov are paying diamonds for a large shipment of opium, which would turn a profit within days of distribution in the streets of the US, and so continue supplying the Soviets with arms.

The Mujahideen help Bond and Milovy infiltrate the air base. Bond plants a bomb in the back of the cargo airplane transporting the drugs, but Koskov recognises him. Bond hijacks the airplane, while the Mujahideen attack the airbase. Milovy, at the last minute, joins Bond in the airplane take off and assumes the controls while Bond leaves to defuse his bomb. Necros, however, has stowed away on board, and attacks Bond. Milovy accidentally opens the cargo door, and Bond and Necros are sucked out, on the cargo net holding the opium; Necros and Bond fight. Necros is left hanging from Bond's boot. Bond cuts his bootlaces, dropping Necros to his death.

Bond manages to find the bomb amidst a slew of bags and defuses it with just two seconds left on the fuse. Milovy flies over Kamran Shah's Mujahideen, who are being pursued by Soviet soldiers across a bridge. Bond reactivates the bomb and drops it onto the bridge, killing the Soviets, helping the Mujahideen win their battle. However, soon after their gunfire-punctured fuel tanks deplete, and as there is no place to land Bond and Milovy use the release chute on the jeep to extract themselves as the airplane crashes in Pakistani territory.

With Leiter's help Bond infiltrates Whitaker's residence, and pops in as "General" Whitaker is playing a battle in his terms. When Bond tells him that the opium is burned, Whitaker is determined to kill him. He takes out a heavy assault rifle with a shield. When Bond uses up all of his bullets, Whitaker makes a glib remark: "Well, you've had your 8, now I'll have my 80!", taunting Bond with remarks about new technology with weapons while hunting him through his amory.

Bond's key-finder saves him again, when he uses the plastic explosive to topple a bust of Wellington onto Whitaker, killing him. The KGB save Bond's life when agents, led by General Pushkin, burst in and kill the Whitaker guard who had cornered Bond. General Koskov is found by KGB agents, and, while not killed, he is to be flown back to Moscow "in the diplomatic bag", by Pushkin's order.

In London, Milovy performs with an orchestra with M, now-diplomat General Gogol and General Pushkin attending. M reveals that Gogol has persuaded the Soviet government to allow her to perform in both the Soviet Union and in Great Britain. Kamran Shah and his men arrive but miss most of the performance. Milovy introduces Shah and his men to Gogol and the Russians before retiring to her dressing room. Bond then surprises her there and the two share a kiss. 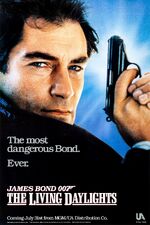 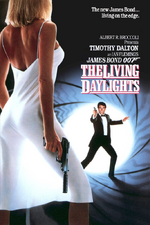 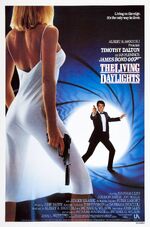 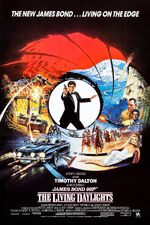