The Living Daylights (also known as The Living Daylights: The Computer Game) is a 1987 run and gun video game published by Domark Software. The game is based on the 1987 film of the same name. Originally intended for a mid-July 1987 release to coincide with the film, the game was delayed and released in September 1987 for all major computing platforms.[1][2] The game was developed by several companies with concept and design provided by Domark's Richard Naylor.

The game was a straightforward platform shooter game in which the player navigates James Bond through horizontally scrolling levels and shoots various bad guys. Each level's playing area consists of three horizontally scrolling sections. 007 moves along the central space, avoiding rocks and potholes, with the areas either side scrolling at different speeds to create a parallax effect. The foreground comprises details of hedges and buildings, while in the background lurk Bond's enemies. Each level is interspersed by a Choose Weapon screen, with five seconds to make the decision as to which the player wants to take for the next level.[2]

Released after their previous title, the poorly received A View to a Kill, Domark bosses Dominic Wheatley and Mark Strachan were determined not to repeat past mistakes with their 1987 tie-in video game. Despite making money, the previous game had not met with critical approval.[3] Discussing The Living Daylights, designer Richard Naylor noted in an interview with Computer & Video Games magazine "the Americans were going to design the game for us. What they came up with was something we did in A View to a Kill. three games in one. Nobody thought that was a good idea."[4] Consequently, the developer settled on a shoot 'em up format "with a tiny bit of strategy in picking the right weapon for Bond to use."[4] The game was released on both computer and arcade platforms, with Naylor noting that he believed it to be the first time an arcade game and computer game had been designed at the same time. 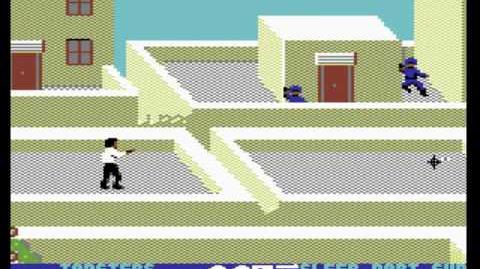