The Worm was a fictional photosensitive super-criminal. A recurring character voiced by American actor, Jan Rabson, Worm made two appearances in the 1991–92 spin-off animated television series, James Bond Jr., beginning with episode 10 ("A Worm in the Apple") and concluding with episode 13 ("Pompeii and Circumstance").

The criminal known only as "The Worm" was a first-rate terrorist and hypochondriac with an intense dislike of sunlight, thus his plans often took place deep underground. He wore red-tinted protective eye-wear designed to prevent bright light from discomforting his eyes. Notably, he is the only recurring villain in the series apparently not to have been associated with the criminal organization, SCUM.

His first planned scheme was to undermine and destroy New York's tallest skyscraper; detonating explosives under it and causing the building to sink into the ground. James Bond Jr. stumbles upon his operation and the Worm attempts to kill him by entombing him in the rock club he is attending. The assassination attempt fails and Bond pursues him to his base of operations, where he is promptly taken prisoner. In a bid to escape, Bond destroys Worm's glasses; however, he casually steals the student's pair of hi-tech shades. Bond subsequently escapes and foils his plan to detonate the explosives by telling I.Q. to turn off the liquid crystals in the shades - disorienting the villain with natural light and forcing him to drop the detonator. He is taken into custody by the NYPD.

At some point, the Worm escapes custody and raids Italian military installations for the parts to build a fleet of makeshift boring tanks. Using them, he searches underground for an ancient treasury temple buried under Pompeii. His activities cause seismic disturbances across the region; drawing the attention of Bond, whose sports car almost crashes into a collapsed section of road. In the process of extracting the treasure, Worm tunnels into a lava flow and attempts to escape. Bond quenches the flow and drives Worm's machine out of the tunnels by boring into the ocean with a captured tank. Above ground, the soaking Worm is surrounded by the Italian army; but ultimately evades capture. 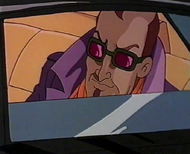 The Worm threatens Bond from his limousine, as seen in "Pompeii and Circumstance" (1991).
Add a photo to this gallery

Retrieved from "https://jamesbond.fandom.com/wiki/The_Worm?oldid=89161"
Community content is available under CC-BY-SA unless otherwise noted.