"There is no Mr. Case, the T is for Tiffany."
"Tiffany Case? Definitely distinctive."
"I was born there, on the first floor, while my mother was looking for a wedding ring."
"Well, I'm glad for your sake it wasn't Van Cleef & Arpels."
― Tiffany Case and James Bond[src]

Tiffany Case is a fictional American diamond smuggler. The character appeared in the 1971 James Bond film Diamonds Are Forever and was portrayed by American actress Jill St. John. Tiffany is portrayed as wise-cracking, somewhat ditzy, slightly naïve, and more money-grubbing than her literary equivalent.

The 1971 film adaptation of Diamonds Are Forever substantially revised the plot and, with it, Tiffany's character. While she is still a diamond smuggler, she is now unwittingly working for Bond's archnemesis, Ernst Stavro Blofeld, and his terrorist organization, SPECTRE. Tiffany says that she was named after her (accidental) birthplace, Tiffany & Co., where her parents were going through a choice of wedding bands, to which Bond dryly joked that she was lucky that it hadn't happened at Van Cleef & Arpels.

First meeting her in Amsterdam, James Bond arranges a partnership with her in disguise, but this time it is to investigate her role in Blofeld's latest criminal scheme. She initially believes that she and her partner are going to make millions, but gets caught up in much more than she bargained for when the real Peter Franks arrives on her doorstep. The pair then travel to the United States for the next step in the smuggling operation.

Eventually Tiffany reneges on her deal and flees, passing off the diamonds to the next SPECTRE smuggler. Later she changes her mind again after she and Bond find Plenty O'Toole soaking in Tiffany's swimming pool, drowned mistakenly in her stead by Blofeld's hit men. Tiffany continues to help Bond follow the path of the smuggled diamonds until the trail leads to Blofeld on an oil rig.

By the end of the film, Tiffany has helped Bond defeat Blofeld, and the two go on a romantic cruise together. They are briefly interrupted by an assassination attempt by Blofeld's henchmen, Mr. Wint and Mr. Kidd, but Bond foils it, and the two sail off into the night.

It is also noteworthy that Case must have had some sort of knowledge of Bond prior to actually meeting him as when Bond kills Peter Franks while himself still pretending to be Peter Franks, Case picks up Bond's ID which Franks has and comments that "You don't kill James Bond and just wait for the cops to show up".

Canadian actress Linda Thorson met with Albert R. Broccoli to be considered for the role of Tiffany Case, but some time later, Broccoli told Thorson she was never cast in a Bond film because she didn't have long hair.[1]

According to director Guy Hamilton, the decision to cast Jill St. John's was largely a favor to her close friend, lawyer Sidney R. Korshak, who had facilitated aspects of the production in Nevada.[2] Broccoli had initially suggested her for the small role of Plenty O'Toole - much to Hamilton's evident frustration. Strongly opposed to the suggestion, Hamilton reached a compromise by proposing the larger role of Tiffany Case.[2] 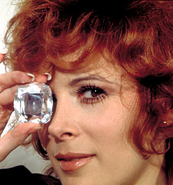 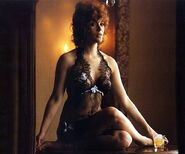