Head of the Japanese Secret Service

Tiger Tanaka is the fictional head of the Japanese Secret Service and the deuteragonist of the 1967 James Bond film You Only Live Twice. Portrayed by the late Japanese actor Tetsuro Tamba and voiced by Robert Rietty, Tanaka is based on the character of the same name of Ian Fleming's 1964 novel of the same name.

When the movie got dubbed in Japanese, Tiger was voiced by Takashi Taniguchi in the DVD/Blu-Ray version.

Tiger Tanaka is the youthful, charismatic chief of the Japanese secret service who rarely makes public appearances. Tiger forged a strong relationship with James Bond while he was in Japan. His headquarters are inside an underground train that constantly travels around the Tokyo subway for his protection. He also operates a ninja training school in a castle in a remote area of Japan where he trains Bond in the art of Ninjitsu and teaches him to become a Japanese, marrying him to Kissy Suzuki.

Later, after being alerted of Bond's discovery of the Volcano lair by Kissy Suzuki, Tanaka aids Bond in raiding and defeating Ernst Stavro Blofeld, head of SPECTRE, using a team of ninja agents to invade the villain's lair in an inactive volcano.

Efficient and a follower of the latest technologies and trends, Tanaka is the perfect man to be heading the Japanese secret service. He is typically brisk with his staff but deeply respects loyalty. When not on duty, Tiger transforms into the warm, jovial and welcoming host that Bond grows to respect. He is determined to teach the British agent the ways of the Japanese men, culminating in having him pretend to marry one of his own agents as cover. In many ways, Tanaka is more than a match for 007, in terms of womanising and drinking, but is skeptical about how much Bond smokes. Even though most of his job takes place behind a desk (or onboard his private underground train), Tanaka is still fit and fights with the best of them.

Tetsuro Tamba was criticized in the media for being too young to portray Tiger Tanaka. By the late 1990's he was seen as a significant religious figure in Japan. 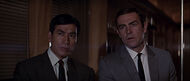 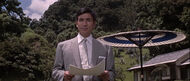 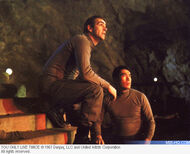 Retrieved from "https://jamesbond.fandom.com/wiki/Tiger_Tanaka_(Tetsuro_Tamba)?oldid=101401"
Community content is available under CC-BY-SA unless otherwise noted.