Teresa "Tracy" Bond (née Draco) was the fictional daughter of criminal syndicalist Marc-Ange Draco and the wife of James Bond. Based on the literary character from the 1963 Ian Fleming novel On Her Majesty's Secret Service, the Bond girl appeared in the 1969 film of the same name, portrayed by the late British actress Diana Rigg. She is notable for being the only cinematic woman to officially marry the series' titular character. Tracy would later to be re-imagined for both the 1986 James Bond 007 tabletop role-playing game and Activision's 2012 James Bond video game 007 Legends, voiced by Nicola Walker.

Born Teresa Draco in 1943, she is the only child of Marc-Ange Draco, the head of the Unione Corse, a powerful Corsican crime syndicate – not quite as large as SPECTRE, but with substantially larger "legal" operations, including Draco Construction. Teresa goes by "Tracy" because she feels "Teresa" does not suit her (as she introduced herself to Bond, "Teresa is a saint; I'm known as Tracy"). Tracy's mother died in 1955; her father then sent her to a boarding school in Switzerland. Deprived of a stable home life, Tracy joined the "international fast set", committing "one scandal after another"; when Draco cut off her allowance, Tracy committed "a greater folly" out of spite. She later married Italian Count Giulio di Vicenzo who subsequently died alongside one of his mistresses, while behind the wheel of a Maserati.

Circa 12th September 1969[3][1] in Portugal, Tracy attempts suicide by drowning, only to be saved by James Bond. Bond is set upon by her father's men, and she escapes in her red Cougar. Later, their paths cross again at the Hotel Palacio Estoril's casino, where she recklessly loses a bet she can't back. After Bond rescues her by paying it, Tracy invites him to her room; but he is ambushed by another of Draco's men. Returning to his suite, Tracy holds the spy at gunpoint with his own Walther PPK. Bond disarms her and she seduces him in payment of the casino rescue. On the morning of 13th September 1969[3], she departs while Bond sleeps; leaving full payment for her casino loss. As he checks out of the hotel, 007 is abducted and taken to meet with Draco, who pleads with him to continue their relationship; claiming that it has changed her for the better. Draco wants a husband for her that will "dominate" her and quell her rebellious attitude. Bond initially refuses, but he changes his mind when Draco offers his resources to track down SPECTRE leader, Ernst Stavro Blofeld. The following week, Bond attends Draco's birthday celebrations at his estate near Estoril.[2] There, a furious Tracy becomes aware of her father's arrangement with 007 and forces him to conclude it immediately, by disclosing the withheld information about Blofeld. Bond reveals to the heartbroken girl that his affections were sincere, and the pair continue to court one-another, falling in love.

During the Christmas period of 1969, while hiding from Blofeld's men in the village of Mürren, Bond unexpectedly encounters Tracy. She is in Switzerland looking for him, having been told his whereabouts by her father, and helps 007 escape his SPECTRE pursuers; concluding in a frantic car chase in her Cougar. A blizzard forces them to take shelter in a remote barn, where Bond professes his love for her. He proposes marriage, which she accepts. The next morning, the pair are pursued by Blofeld on skis; who attempts to kill them in an avalanche. Presuming 007 to be buried alive, the villain takes the unconscious Tracy back to his mountain fortress at Piz Gloria. Refused aid from his superior M, Bond enlists the help of Draco and his forces to attack Blofeld's headquarters, while also rescuing Tracy from captivity.

The pair subsequently marry at Draco's estate and depart for their honeymoon in Bond's flower-festooned Aston Martin DBS. Along the coast, Bond pulls over to remove the decorations and tragedy strikes, as Blofeld and his right-hand woman Irma Bunt strafe the car with a silenced M16A1 assault rifle in a drive-by shooting. Tracy is shot through the forehead and killed. A police officer finds Bond's car, prompting a tearful Bond to mutter that there is no need to rush calling for help by saying, "We have all the time in the world", as he cradles Tracy's lifeless body.

The follow up film, Diamonds Are Forever (1971), shows James Bond tracking down Blofeld in the pre-title credits, but it is only assumed that Bond is doing so out of revenge for Tracy's death. However, she is never mentioned by name in the film. As a point of continuity between the classic 1962-2002 continuity of James Bond films, subsequent stories also mention Tracy or make reference to the fact that Bond was previously married. 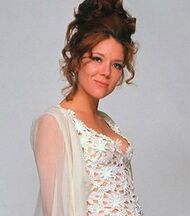 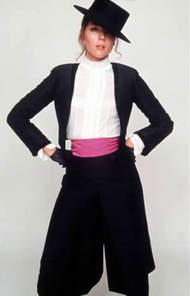 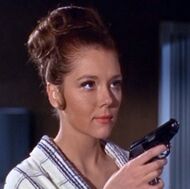 Tracy threatens to kill Bond for a thrill, as seen in On Her Majesty's Secret Service (1969). 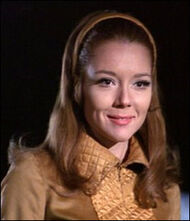 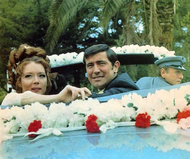 Tracy just seconds before she's gunned down, as seen in On Her Majesty's Secret Service (1969).

Bond cradles Tracy's lifeless body, as seen in On Her Majesty's Secret Service (1969).

Tracy's grave, as seen in For Your Eyes Only (1981).
Add a photo to this gallery

Retrieved from "https://jamesbond.fandom.com/wiki/Tracy_Bond_(Diana_Rigg)?oldid=101448"
Community content is available under CC-BY-SA unless otherwise noted.