On Her Majesty's Secret Service (novel)

On Her Majesty's Secret Service (novel)

Teresa “Tracy” Bond is a fictional character in the James Bond novel On Her Majesty's Secret Service. To date she is the only Bond girl to marry secret agent Commander James Bond officially, Kissy Suzuki was never his actual wife, but Bond would later marry again in John Gardner's continuation novel; Scorpius.

Born Teresa Draco in 1937, she is the only child of Marc-Ange Draco. Marc-Ange is the head of "The Union Corse", a powerful international mafia crime syndicate -- not quite as large as SPECTRE, but with substantially larger "legal" operations, including Draco Construction. Teresa goes by "Tracy" because she feels "Teresa" is too grand. (As she once said, "Teresa is a saint; I'm known as Tracy.")

Teresa was the only daughter of Marc-Ange Draco and his wife, a former English governess, who had met him while he was hiding out from the authorities in Corsica. Draco's wife died when Teresa was twelve; he then sent her to a boarding school in Switzerland. Deprived of a stable home life, Teresa joined the "jet set", committing "one scandal after another"; when Draco cut off her allowance, Teresa committed "a greater folly" out of spite. She later married Italian Count Giulio di Vicenzo who, during their marriage, managed to get a hold of a large portion of her money before eventually leaving her; he subsequently perished while driving a Maserati in the company of one of his mistresses. During this marriage, Teresa had a child, who later passed away due to spinal meningitis.

She first encounters James Bond, speeding past him on the road while he was on his way to the Casino to pay his respects to Vesper Lynd. Later she interrupts a card game that Bond was partaking betting against another player. She loses and does not have the funds to pay up. Gossip starts when she starts talking to the maître de that she had committed a coup de deshonneur. Seeing this, Bond places the tokens in the middle of the table bailing her out claiming the two were playing in a partnership and he got distracted. The pair meet up at Hotel Splendide and make love that night, Tracy claiming it was payment for Bond saving her from the social ostracism of the coup de deshonneur.

Due to her past, Teresa became suicidal until she was saved the next day by Bond while attempting to drown herself in the sea. Her father, Marc-Ange, pleaded with Bond to continue to see Tracy, claiming that their relationship had changed her for the better. Initially Bond refused saying she need a psychiatrist, not him; however, he later changed his mind when Marc-Ange offered his resources for anything Bond desired. Since the events of Operation Thunderball and the demise of SPECTRE, Bond had been on Operation Bedlam, hunting for Ernst Stavro Blofeld and at one point was willing to retire from MI6 because he felt the hunt was folly and that his services and abilities could be used better. Using Marc-Ange's resources, however, Bond was able to track Blofeld to Switzerland.

In return Bond continued to see Tracy, whom he acknowledged he cared and sympathized for. The two again meet and consort on Marc-Ange's boat, this time with genuine enthusiasm on Tracy's part. She agrees with Bond and her father that she needs help and agrees to go to a psychiatric clinic. By this time Bond fell in love with her, as she with him. Under the promise from Bond that they would reunite after her recovery from her mental strains she goes to a Swiss clinic for mental health.

Later, by chance, Bond and Tracy meet on Christmas eve in the Swiss Alps. Bond was on the run from SPECTRE and Tracy aids him in contacting MI6 with Blofeld's location and sees him to an airport. While there Bond proposes to Tracy. Later, her father aids Bond in assaulting Piz Gloria to capture Blofeld, but to no avail.

Tracy marries Bond in a registry office in Munich and then go on their honeymoon. While driving, Blofeld and Irma Bunt attampt a drive-by shooting on Tracy and Bond causing them to crash. Bond awakens and finds Tracy, dead, who has killed on impact whilst he was completely injury free. A short while later, a road patrol officer finds Bond cradling a dead Tracy claiming they had "All the time in the world". 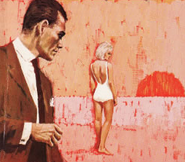 Tracy on the cover of the 2003 edition

For Tracy's background, Fleming used that of Muriel Wright, a married wartime lover of Ian Fleming's, who died in an air-raid.