The UAZ 469 is an off-road vehicle built by Soviet (today Russian) manufacturer UAZ, mainly for military and police forces. It was introduced to Warsaw Pact military forces as a successor to the GAZ 69, and is even today used by many armed forces worldwide, as most of the former Soviet military equipment had been sold after the fall of the iron curtain, sometimes to dubious buyers.

The first UAZ 469 appears at the frozen lake, it is visible when Bond jumps his Aston Martin V8 Vantage Volante over the guard house. Near the end of the film, Kara Milovy drives an UAZ mock-up, but this vehicle is a rather new Land Rover 90 instead.

GoldenEye sees many UAZ vehicles, as the Russian military plays an important role in the storyline. In a deleted scene, originally intended to be shown before the opening bungee-jump, an UAZ can be parked next to the guardhouse, where Bond cuts the telephone cable. The UAZs seen in this movie are UAZ 3151 models, an upgraded version of the 469, which was introduced in 1985. Four of these can be seen when Bond and Natalya Simonova are arrested by soldiers after the helicopter explosion on the monument graveyard, and four others are used during the tank chase, where they get destroyed: One explodes after being hit by the second one, which falls into the river afterwards. Two others are first smashed into police cars, and crushed by the tank afterwards. Some of the newer UAZs destroyed in GoldenEye are actually replaced by UAZ 469 models during the actual crash.

A total of six UAZ 469 were used during the opening sequence on the airstrip. One is used by Henry Gupta, another one gets hit by a rocket and explodes.

The World Is Not Enough

Renard, Trukhin and other terrorists use two UAZ 469s to steal the nuclear bomb at the ICBM base in Kazakhstan. Bond himself is passenger in one, while posing as Dr. Arkov. Some more UAZs can be seen parked around the ICBM base.

Several UAZs can be seen used by North Korean forces in this movie. General Moon rides in one at the beginning, another one explodes during the pre-title sequence. A destroyed one appears during the hovercraft chase. Gustav Graves, Miranda Frost and Vlad use an UAZ when getting to their plane. Some more UAZs appear during the battle at Moon's base, the prisoner exchange and on the airfield.

Another UAZ can be spotted in the background in the Ugandian rebel camp. 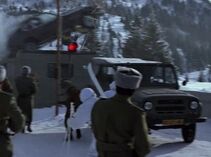 The UAZ as seen in The Living Daylights. 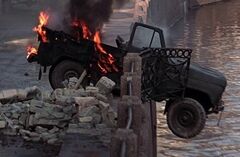 A burning UAZ in GoldenEye.

A soldier fires at Bond from his UAZ.

A UAZ in Tomorrow Never Dies. 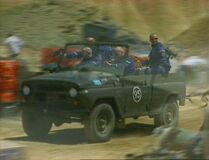 Behind-the-scenes shot of Renard and his men in their UAZ in The World Is Not Enough.

UAZ used in Die Another Day.
Add a photo to this gallery

Retrieved from "https://jamesbond.fandom.com/wiki/UAZ_469?oldid=82222"
Community content is available under CC-BY-SA unless otherwise noted.