Ursula Andress is a Swiss actress and sex symbol of the 1960s who is best known for her role as Bond girl Honey Ryder in the first James Bond film, Dr. No (1962), for which she won a Golden Globe. She later starred as Vesper Lynd in the 1967 Bond-parody Casino Royale. For her role in Dr. No, Andress won the Golden Globe Award for New Star of the Year in 1964.

Andress became famous for her portrayal of Honey Ryder, a shell diver and James Bond's object of desire in the very first Bond film, Dr. No (1962). In a well-known scene, she rises out of the Caribbean Sea in a white bikini. The iconic scene made Andress the quintessential Bond girl, inspiring every bikini-clad Bond girl to come, including Halle Berry, who in Die Another Day emerges from the sea in a similar fashion.

Playing around and lounging on the set of Dr. No with Sean Connery. 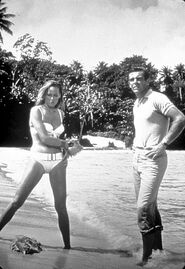 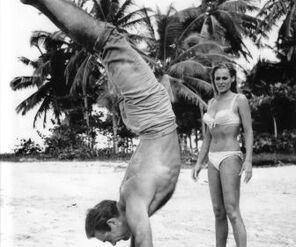 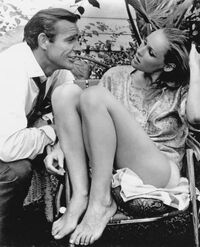 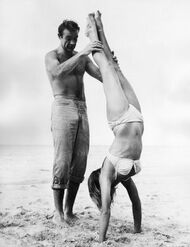 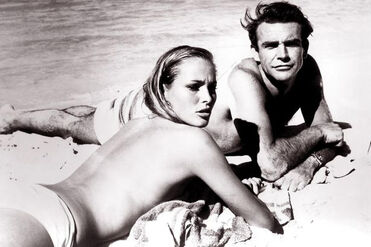 Retrieved from "https://jamesbond.fandom.com/wiki/Ursula_Andress?oldid=99150"
Community content is available under CC-BY-SA unless otherwise noted.