There are no spoilers on this page, unless you haven't even seen the trailer. However, clicking the links to articles may lead you to information that you DO NOT want to see before watching Skyfall. Browse the 007 Wiki at your own risk!

Skyfall comes out in the U.S. on November 9th, unfortunately two weeks after our friends in Europe. If you want to win 2 tickets to see the movie, as well as the Bond 50 Blu-ray collection, enter a submission in our Ultimate Bond Movie Contest. In the meantime, here are 007 reasons to look forward to the new Bond film:

If you've seen No Country for Old Men, you understand what kind of villainous power Javier Bardem possesses in his acting arsenal. Beyond that, he's arguably the best actor to ever sign up to be a Bond villain. Pick a random movie from his filmography and you will be blown away by his acting chops, even if the movie as a whole does not appeal to you. In Skyfall, he plays Raoul Silva, a former MI6 agent turned cyberterrorist who is out for revenge on those who supposedly betrayed him. Bardem never disappoints, and I personally anticipate greatness from this performance. Every true Bond villain has a signature physical trait, and Silva's awkward blonde dye job does the trick, despite being infinitely less freaky than his haircut in No Country for Old Men.

2: M is Stepping Out 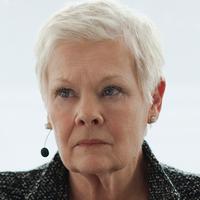 Judi Dench has been an amazing M since GoldenEye in 1995, but she's almost always safe at the MI6 Headquarters in London, sipping tea behind a desk and yelling into Bond's earpiece. The major exception was her appearance in Siena during Quantum of Solace, which turned out to be a little taste of what's to come in Skyfall. If you've seen the trailer, you know that M plays a major role in the new film. In fact, after Bond himself, she is considered the primary player in Skyfall. For fear of spoilers I'll just leave it at this: Dame Judi Dench is a bad ass, and M getting into the action is long overdue.

3: We're Getting Up Close and Personal with Bond 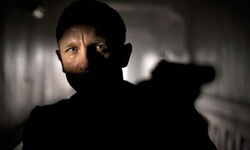 Some of the biggest buzz surrounding Skyfall is that we will actually get to know James Bond better. A lot of people have talked about Bond getting both physically and psychologically "pushed to the edge" in this film, and apparently there is a plot device that takes us back to the beginning of the character, so that we may learn about his roots. This is the type of stuff that we haven't seen in any Bond film yet, and to be fair, it may upset the traditionalists who have always been kept in the dark about the past of their favorite spy and want to keep it that way. Like the last two films, Daniel Craig remains a hard and brooding Bond, but this film takes the introspection to a whole new level. The new direction makes sense though, if you think about it. The internet and air travel has made our world a much smaller place, so the exotic locations of Bond movies are no longer that impressive. Instead of traveling the world vicariously through Bond, the smart viewer demands to travel deep into Bond's psyche.

4: Ben Whishaw is the new Q

As the franchise has already entered the post-internet world, an old-timer playing the character Q has become less believable. It's not a big enough role to make or break the film, of course, but the character's inclusion in Skyfall (after a 2 film absence) suggests that this might be a long-term gig. Heck, Desmond Llewelyn played Q for 36 years!

You might not be familiar with the classically-trained stage actor Ben Whishaw, who played Hamlet at The Old Vic and has been starring in the BBC seriesThe Hour, but he kills it. He once appeared with Daniel Craig in the Layer Cake, and his recent turn in Cloud Atlas was a triumph. As a bonus, Whishaw's pretty features and geeky good looks are an alternative to Craig's rough and tumble sex appeal, for the type of ladies who prefer The Doctor over The Rock. In 2013, he will star alongside Judi Dench in a play (Peter and Alice) written by John Logan; a Skyfall trifecta in the West End!

5: The script was finished before filming began

I know, right, that's crazy talk! I'm not saying the Skyfall screenplay is perfect, but anything is an improvement from Quantum of Solace's dismal script, which was incomplete when filming began during the 2007-2008 writers' strike. Quantum was never supposed to be a sequel to Casino Royale, but that's how it ended up after a couple shoddy rewrites were turned over to director Marc Forster and leading man Daniel Craig to finish. Seriously. Writers could not be legally hired, so Craig had to rewrite scenes himself. [1] For Skyfall, they added writer John Logan (pictured), who wrote Any Given Sunday, Gladiator, The Last Samurai, The Aviator, Rango, and Hugo. Alas, the script was set in stone before production began, and Judi Dench did not have to rewrite scenes. Logan has already signed on for the next two Bond films.

6: These Bond girls are to die for 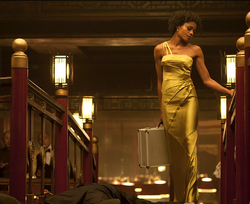 Describing the roles of these Bond girls within the storyline of Skyfall would be stepping too close to spoiler territory, so let's just talk about how stunningly beautiful they are and accept the praise they have already received from the European audiences. French actress and model Berenice Marlohe, who plays Severine, is out of this world gorgeous, although her acting credentials are minimal. Naomie Harris, whom you've seen in 28 Days Later and the Pirates of the Caribbean movies, has been warmly received. The strong and sexy Harris has been getting a lot of buzz for her knock-out performance as MI6 agent Eve, who is at the center of a lot of the film's action sequences. She also does a great job of flirting with Bond, which should go without saying.

7: Skyfall looks back AND forward 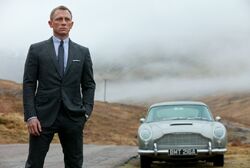 In Casino Royale and Quantum of Solace, EON sought to bring Bond into the modern age- with mixed results. They achieved a high-tech feel despite using less gadgets, but poorly misused the shaky camera-work made popular by the Bourne series. Skyfall successfully points the way forward with sleek cinematography, a Nolan-esque epic sense of scale, and a perfect balance of grandiose violence with quiet suspense. However, most of the film's charm arrives by remaining iconically true to the original 1960's Bond adventures, just in time for the character's 50th birthday. The theme music returns in full force and many references are made to the old films (in a tasteful, funny manner) without distracting viewers from the Skyfall storyline. Also, the Aston Martin DB5 is back!

Retrieved from "https://jamesbond.fandom.com/wiki/User_blog:Porterfield/7_Reasons_Skyfall_Will_Be_Stunning?oldid=16739"
Community content is available under CC-BY-SA unless otherwise noted.