The Money
The Bitch
Stephanie Broadchest

Vesper: "I'm the money."
Bond: "Every penny of it."
―Vesper and Bond meeting for the first time on the train traveling towards Montenegro[src]

In the 2006 film version of Casino Royale, Vesper Lynd is a foreign liaison agent from the HM Treasury's Financial Action Task Force assigned to make sure that Bond adequately manages the funds provided by MI6 for the high-stakes poker game at the Casino Royale. However, she is secretly a double agent working for Quantum, the terrorist organization MI6 is trying to stop. She is an unwilling traitor however; she is only helping Quantum because they have taken her lover Yusef Kabira hostage and threatened to kill him if she does not cooperate.

"All right... by the cut of your suit, you went to Oxford or wherever. Naturally you think human beings dress like that. But you wear it with such disdain, my guess is you didn't come from money, and your school friends never let you forget it. Which means you were at that school by the grace of someone else's charity: hence that chip on your shoulder. And since your first thought about me ran to "orphan", that's what I'd say you are."
― Vesper Lynd analysing Bond.[src]

Vesper is introduced on a train headed to Montenegro with James Bond. They quip at each other and he establishes that she shares a similar past as an orphan. Vesper is initially sceptical about Bond's ego and at first is unwilling to be his trophy at the poker tournament with Le Chiffre. She refuses to bankroll him after he goes bankrupt on an early hand. However, she assists Bond during his struggle with LRA leader Steven Obanno, knocking away the gun from the latter. She afterwards retreats to the shower, feeling that she has blood on her hands from helping to kill Obanno. Bond kisses the "blood" off her hands to comfort her, and they return to the casino.

Shortly afterwards she saves Bond's life. Poisoned by Le Chiffre's girlfriend, Valenka, Bond struggles unsuccessfully to connect a key wire to his automatic external defibrillator, but Vesper arrives and makes the proper connection, allowing the machine to revive him.

After Bond wins the poker tournament, Le Chiffre kidnaps Vesper, and Bond gives chase. They fall into Le Chiffre's trap, but both are saved by Quantum henchman Mr. White, who shoots and kills Le Chiffre for misappropriating his organisation's funds.

While both are in a hospital to recover from torture, Bond and Vesper fall deeply in love, and Bond plans to resign from the service in order to be with her. As in the novel, Bond and Vesper go on vacation to Venice, hoping to start a new life. Unknown to Bond, however, Vesper embezzles the money and delivers it to a group of Quantum henchmen. When Bond realizes what has happened and goes after Vesper, the thugs take her hostage and lock her in an elevator while they do battle with him. After several explosions, the flooded building sinks, but Vesper resigns herself to death and locks herself in, even as Bond frantically tries to open the elevator. In her final gesture, she kisses Bond's hands to clear him of guilt. Bond finally extricates her and tries to revive her using CPR, to no avail.

As in the novel, Bond copes with his lover's death by renouncing her, saying, "The job's done and the bitch is dead". M replies, assuming that Lynd had cut a deal with her blackmailers to spare him in return for the money, and states that "I'm sure she hoped they'd let her live. But she must have known she was going to her death". When Bond opens Vesper's mobile phone afterwards, he finds that she has left Mr. White's phone number, enabling Bond to track down and confront him at the movie's end.

In the 2008 film, Quantum of Solace, Bond is seeking revenge for her death. At the start of the film, M tells Bond that he is too close to the mission to be objective, but Bond assures her that Vesper is no longer important to him. He takes Vesper's photograph and is encouraged by René Mathis to "forgive her" and to "forgive [himself]". At the end of the film, it is revealed that Yusef is an agent working for Quantum, tasked with seducing high-ranking women in the world's intelligence agencies. He is then "kidnapped" by Quantum, and the women are forced to become double agents in the hope of securing his freedom. This information vindicates Vesper in Bond's eyes, making him finally see that her "betrayal" was not her fault. He doesn't kill Yusef, but leaves him to MI6 and congratulates M on the fact that she was right about Vesper. As he walks away, he drops Vesper's necklace in the snow.

In the 2015 film, Spectre, Vesper appears in the title sequence. All main villains from the Daniel Craig films (and Vesper and M (Judi Dench), with the exception of Dominic Greene) who have died or been killed are in this scene. When Bond and Madeleine Swann go to Tangier, he finds a tape labelled "Vesper Lynd - Interrogation" in the L'Americain hotel room used by Mr. White. In this scene, we learn that Vesper went though some form of interrogation. We eventually find out that Quantum is an organisation that is run by SPECTRE. So Vesper was ultimately and without knowing working for SPECTRE. Bond and Madeleine Swann are captured by Franz Oberhauser and he attempts to destroy Bond and Madeleine Swann's relationship by talking to Madeleine about Bond's deep love for Vesper. Oberhauser is proud that his organisation made her decide to kill herself and that his organisation led her to believe that Bond would not forgive or love her. Finally towards the end of the film her picture appears in the MI6 building as Bond is taken there. This wall shows everyone he knew (from the Daniel Craig films) that have died. We learn from this film that Bond's wounds caused by Vesper's death and Quantum are still open.

Vesper Lynd was an intelligent and perceptive person who was able to guess information about a man simply based on his behavior and mannerisms as demonstrated during her first meeting with Bond. She was also very attractive and elegant, so like many women, she likely feared not being taken seriously by her male colleagues and overcompensates by dressing in a slightly masculine manner, although she also enjoyed wearing evening gowns and makeup. Because of her intellect, Vesper could be suspicious, rebellious, and even icy in certain situations, sometimes making false inferences about those around her and therefore making poor judgments about them, as was the case on several occasions in her relationship with Bond. Vesper was nevertheless sociable and rather sensitive, hence her ability to bond easily with men, even after tense exchanges. She was also very averse to violence to the point of being traumatized after witnessing a murder in which she herself participated (such as that of Steven Obanno), but she was ready to do anything for Yusef Kabira, including betraying his cause if he were to be in danger, unaware that the man was actually using this asset to manipulate her in secret. Vesper, however, felt horrible feelings of guilt at siding with her enemies to the point of becoming suicidal, which eventually led to her demise.

Place in the series

Other than Bond's future wife, Tracy, she is the only woman in the series to whom Bond proposes and is practically the only romantic interest to be a fellow intelligence agent, apart from the film series' Miranda Frost, who turns out to be Graves' double agent. (Gala Brand is a policewoman, not an intelligence agent, and she ultimately rebuffs Bond's advances, being engaged to another man; Tatiana Romanova is in the intelligence business but works for the KGB; and Bond's relationship with MI6 employee Mary Goodnight remains ambiguous at the end of the final book to feature her).

Fleming created a cocktail recipe in the novel that Bond names after Vesper. The "Vesper martini" became very popular after the novel's publication, and gave rise to the famous "shaken, not stirred" catchphrase immortalized in the Bond films. The actual name for the drink (as well as its complete recipe) is uttered on screen for the first time in the 2006 adaptation of Casino Royale. 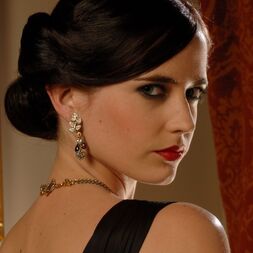 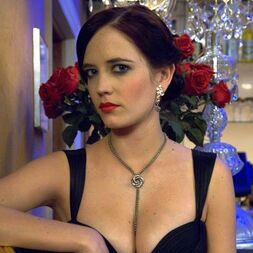 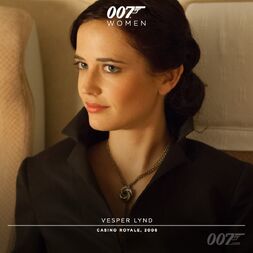 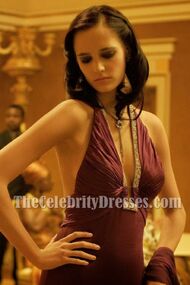 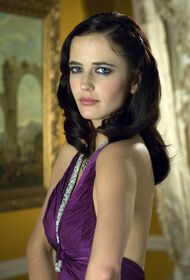 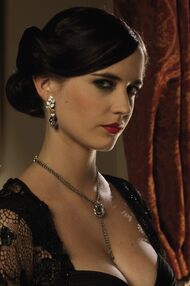