Vesper Lynd was a fictional British intelligence operative working for Station 'S' of the British Secret Service. The character was first introduced in the 1953 James Bond novel, Casino Royale, by Ian Fleming. The first Bond girl to be created by Fleming, she was mentioned in subsequent novels and was adapted for comics, television, and official and unofficial films.

Vesper is an agent of MI6's Station S, loaned to James Bond, much to his irritation, to assist him in his mission to bankrupt Le Chiffre, the paymaster of a SMERSH-controlled trade union. She poses as a radio seller working with René Mathis and later as Bond's companion in order to infiltrate the casino at Royale-les-Eaux, in which Le Chiffre frequently gambles. After Bond takes all of Le Chiffre's money in a high-stakes game of baccarat, Vesper is kidnapped by Le Chiffre's thugs, who also capture Bond when he tries to rescue her. Both are rescued after Le Chiffre is assassinated by a SMERSH agent, but only after Bond has been tortured.

Vesper visits Bond every day in the hospital, and the two grow very close; much to his own surprise, Bond develops genuine feelings for her, and even dreams of leaving the service and marrying her. After he is released from the hospital, they go on a holiday together, and eventually become lovers.

Vesper holds a terrible secret, however: she is a double agent working for MVD, and worked with Bond because she was under orders to see that he did not escape Le Chiffre. (Her kidnapping was staged in order to lure Bond into Le Chiffre's clutches.) Prior to her meeting Bond, she had been romantically involved with an RAF operative. This man had been captured by SMERSH, and revealed information about Vesper under torture. Hence, SMERSH was using this operative to blackmail Vesper into helping them. After the death of Le Chiffre, she is initially hopeful that she and Bond can start a new life, but realizes this is impossible when she notices a SMERSH operative, 'Gettler', tracking her and Bond's movements. Consumed with guilt and certain that SMERSH will find and kill both of them, she commits suicide (via overdose on sleeping pills), leaving a note admitting her treachery and pledging her love to Bond.

Bond copes with the loss by renouncing her as a traitor and going back to work as though nothing has happened. He phones his superiors and informs them of Vesper's treason and death, coldly saying "The bitch is dead."

Bond's feelings for Vesper are not totally extinguished, however; Fleming's eleventh novel, On Her Majesty's Secret Service, reveals that he makes an annual pilgrimage to Royale-les-Eaux to visit her grave. In the novel Goldfinger, moreover, when a drugged Bond believes that he has died and is preparing to enter heaven, he worries about how to introduce Tilly Masterton, who he believes has died along with him, to Vesper.

Place in the series

Other than Bond's future wife Tracy, she is the only woman in the series to whom Bond proposes and is practically the only romantic interest to be a fellow intelligence agent, apart from the movie's Miranda Frost, who turns out to be Graves' double agent. (Gala Brand is a policewoman, not an intelligence agent, and she ultimately rebuffs Bond's advances, being engaged to another man; Tatiana Romanova is in the intelligence business but works for the KGB; and Bond's relationship with MI6 employee Mary Goodnight remains ambiguous at the end of the final book to feature her).

Fleming created a cocktail recipe in the novel that Bond names after Vesper. The "Vesper martini" became very popular after the novel's publication, and gave rise to the famous "shaken, not stirred" catchphrase immortalized in the Bond films. The actual name for the drink (as well as its complete recipe) is uttered on screen for the first time in the 2006 adaptation of Casino Royale. 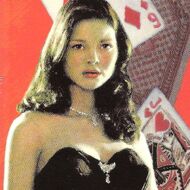 Retrieved from "https://jamesbond.fandom.com/wiki/Vesper_Lynd_(Literary)?oldid=99829"
Community content is available under CC-BY-SA unless otherwise noted.