Dark brown; with a natural wave[1]

The Spy Who Loved Me (novel)

The Spy Who Loved Me (novel)

Vivienne "Viv" Michel is a fictional young Canadian woman from whose perspective Ian Fleming's ninth novel, The Spy Who Loved Me (1962) is written. Fleming wrote a prologue to the novel giving Michel credit as a co-author.

"I found what follows lying on my desk one morning. As you will see, it appears to be the first person story of a young woman, evidently beautiful and not unskilled in the arts of love. According to her story, she appears to have been involved, both perilously and romantically, with the same James Bond whose secret service exploits I myself have written from time to time. With the manuscript was a note signed 'Vivienne Michel' assuring me that what she had written was 'purest truth and from the depths of her heart'. I was interested in this view of James Bond, through the wrong end of the telescope so to speak, and after obtaining clearance for certain minor infringements of the Official Secrets Act I have much pleasure in sponsoring its publication."
― Ian Fleming, The Spy Who Loved Me, Prologue

Vivienne "Viv" Michel, a 23-year-old French Canadian woman narrates her own story, detailing her past, being been orphaned at age 8 when her parents in airplane crash in 1944 in Montreal. love affairs, the first being with Derek Mallaby, who took her virginity in a field after being thrown out of a cinema in Windsor for indecent exposure. Their physical relationship ended that night and Viv was subsequently rejected when Mallaby sent her a letter from Oxford University saying he was forcibly engaged to someone else by his parents. Viv's second love affair was with her German boss, Kurt Rainer, with whom she would eventually become pregnant. She informed Rainer and he paid for her to go to Switzerland to have an abortion, telling her that their affair was over. After the procedure, Viv returned to her native Canada and started her journey through North America, stopping to work at the "Dreamy Pines Motor Court" in the Adirondack Mountains for managers Jed and Mildred Phancey.

At the end of the vacation season, the Phanceys entrust Viv to look after the motel for the night before the owner, Mr. Sanguinetti, can arrive to take inventory and close it up for the winter. Two mobsters, "Sluggsy" Morant and Sol "Horror" Horowitz, both of whom work for Sanguinetti, arrive and say they are there to look over the motel for insurance purposes. The two have been hired by Sanguinetti to burn down the motel so that Sanguinetti can make a profit on the insurance. The blame for the fire would fall on Viv, who was to perish in the incident. The mobsters, are cruel to Viv and, when she says she does not want to dance with them, they attack her, holding her down and starting to remove her top. They are about to continue the attack with rape when the door buzzer stops them.

British secret service agent James Bond appears at the door asking for a room, having had a flat tyre while passing. Bond quickly realises that Horror and Sluggsy are mobsters and that Viv is in danger. Pressuring the two men, he eventually gets the gangsters to agree to provide him a room. Bond tells Michel that he is in America in the wake of Operation Thunderball and was detailed to protect a Russian nuclear expert who defected to the West and who now lives in Toronto, as part of his quest to ferret out SPECTRE. That night Sluggsy and Horror set fire to the motel and attempt to kill Bond and Michel. A gun battle ensues and, in the process of escaping, Horror and Sluggsy's car crashes into a lake. Bond and Michel retire to bed, but Sluggsy is still alive and makes a further attempt to kill them when Bond shoots him.

Viv wakes to find Bond gone, leaving a note in which he promises to send her police assistance and which he concludes by telling her not to dwell too much on the ugly events through which she has just lived. As Viv finishes reading the note, a large police detachment arrives. After taking her statement, the officer in charge of the detail, reiterates Bond's advice, but also warns Viv that all men involved in violent crime and espionage, regardless of which side they are on—including Bond himself—are dangerous and that Viv should avoid them. Viv reflects on this fact as she motors off at the end of the book, continuing her tour of America, but despite the officer's warning still devoted to the memory of the spy who had loved her.

As with much of Fleming's work, the author took incidents from his own life and used them in the novel The Spy Who Loved Me. Vivienne Michel's seduction in a box in the Royalty Kinema, Windsor, mirrors Fleming's loss of virginity in the same establishment. One of Fleming's neighbours in Jamaica was Vivienne Stuart, whose first name Fleming purloined for the novel's heroine. 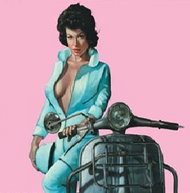 Artist Richie Fahey's depiction of Vivienne Michel for the 2006 Penguin paperback edition of The Spy Who Loved Me.
Add a photo to this gallery
Retrieved from "https://jamesbond.fandom.com/wiki/Vivienne_Michel_(Literary)?oldid=100097"
Community content is available under CC-BY-SA unless otherwise noted.