The Wetbike was an aquatic vehicle used by James Bond in the 1977 film The Spy Who Loved Me.

James Bond receives the Wetbike's parts from Q Branch on the U.S.S Wayne. He later assembles and rides it to Atlantis which is the lair of Karl Stromberg who has taken Anya Amasova with him. Upon reaching Atlantis, Bond ditches the Wetbike and it is presumably destroyed when Atlantis is destroyed by torpedoes. 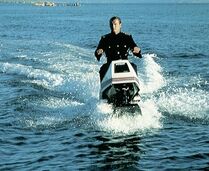 Add a photo to this gallery
Retrieved from "https://jamesbond.fandom.com/wiki/Wetbike?oldid=82226"
Community content is available under CC-BY-SA unless otherwise noted.