W. Winter and B. Kitteridge

Wint & Kidd are a pair of Spangled Mob assassins who appear in the James Bond novel Diamonds Are Forever. They act as enforcers for the smuggling chain of the Spangled Mob.

As killers and "enforcers" to the Spangled Mob, it is their mission, among other things, to make sure the smuggling of the diamonds and everything connected to it go off without a hitch. If something does goes wrong, Wint and Kidd (they are never referred to as "Mr." in the novels) are sent to "persuade" the perpetrators to never make a mistake again. They are obviously quite sadistic and give evidence of enjoying their jobs. This is particularly evident in a scene that Bond witnesses in a mud-bath, where they pour boiling mud over the face of a jockey who they believe has prevented a Mob-owned horse from winning a race.

From London to New York City it is their job to tail whoever is smuggling the diamonds internationally to ensure that the smuggler doesn't get any ideas about going into business for themselves. For this, the duo take on the likeness of American businessmen who call themselves "W. Winter" and "B. Kitteridge". Whenever Wint and Kidd are not portraying the businessmen, however, they're wearing ski masks so no one can figure out their identities. Despite this precaution, Wint has a large red wart on one thumb, a detail that leads to his being positively identified.

Although they are both hardened assassins, Wint is pathologically afraid of travel. When he does have to travel, he wears an identifying nametag and a sticker that says "My blood group is F". He also has to be paid a special bonus by his employers. Because of his phobia, Mr. Wint picked up the nickname "Windy" - although no one would dare call him that to his face. Kidd is nicknamed "Boofy" due to his "pretty-boy" appearance. Felix Leiter suspects that they are both homosexual.

In a ghost town outside of Las Vegas, the leading gangster, Seraffimo Spang, penetrates Bond's cover and details Wint and Kidd to torture Bond to learn his true identity. Wint and Kidd then perform a "Brooklyn stomping," kicking Bond into unconsciousness while wearing football cleats, after which Tiffany Case helps him escape.

The duo are shot by Bond after they kidnap Tiffany on the Queen Elizabeth. Bond comes to her rescue by climbing down the side of the ship and diving into their room via the porthole. They have a small gun battle, and Bond kills them both. Evidence is then faked so it appears as a murder-suicide. 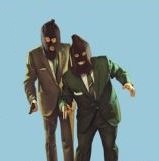 Retrieved from "https://jamesbond.fandom.com/wiki/Wint_%26_Kidd_(Literary)?oldid=81454"
Community content is available under CC-BY-SA unless otherwise noted.