James Bond travels all over the world in his many missions and conquests. This is a map and summary of those world locations. 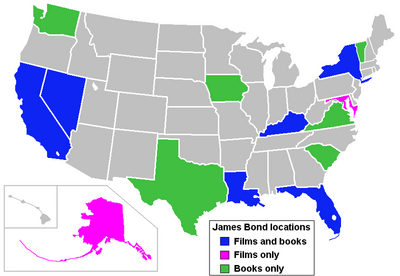 US states Bond visited in the films and books (blue); books only (green).

*With You Only Live Twice, Diamonds Are Forever, Live And Let Die and The Spy Who Loved Me being notable exceptions, Bond is almost always seen at the HQ of MI6 (referred to as MI7 in Dr. No) in central London. From GoldenEye (1995) onward, the HQ is located in the Vauxhall Cross building on the Thames. Prior to that it was a nondescript building near Whitehall, which in three films (Dr. No, OHMSS, and The Living Daylights) was disguised as the headquarters for Universal Exports, the Secret Service's front company.

This list shows which films were shot in which countries.

Retrieved from "https://jamesbond.fandom.com/wiki/World_locations_in_James_Bond?oldid=100227"
Community content is available under CC-BY-SA unless otherwise noted.