Deceased, crushed to death from being caught in a tree

Enjoy it while it lasts.: "Xenia Onatopp"
James Bond: "The very words I live by."
―Onatopp and Bond[src]

Born in the former Soviet republic of Georgia, Xenia Zaragevna Onatopp was a fighter pilot in the Soviet Air Force. After the collapse of the USSR, she joined the Janus crime syndicate, led by renegade MI6 agent Alec Trevelyan. Operating as a ruthless enforcer and assassin for the organisation, her main characteristic is that she apparently can receive sexual satisfaction through killing. Her sadistic sexual proclivities, coupled with her overall lack of conscience as well as remorse for the deaths she causes, would seem to qualify her as a sociopath. She is proficient in martial arts, with a considerable degree of physical strength. She is a skillful aviator, able to commandeer a stolen EMP-hardened helicopter.

Stealing the Helicopter and GoldenEye

In 1995, James Bond gets into a car chase with Onatopp in Monte Carlo. He later meets her at a casino, his suspicions raised by her taste for expensive vehicles (with fake number plates) and her suspicious relationship with Canadian Navy admiral, Chuck Farrel. Suspecting her, he places her under surveillance, and runs a background check of her via MI6. Later that evening, Onatopp lures the admiral onto the Janus-leased yacht, Manticore. As Onatopp crushes the admiral to death with her thighs during sex, her Janus accomplice Russian General Ourumov steals his credentials. The next day, the pair use his credentials to board a military ship where the prototype Eurocopter Tiger helicopter is scheduled for a high-profile test flight. Onatopp murders the test pilots and they assume their identities, stealing the helicopter. Onatopp (disguised as a Colonel and posing as Ourumov's pilot/staff officer) and the General fly the helicopter to a military bunker in Severnaya, Siberia, where Ourumov - the Head of Space Disivion - requests the control disk for GoldenEye, an electromagnetic Soviet satellite weapon from the Cold War. Upon receiving the disk, a rifle-wielding Onatopp massacres the staff with sociopathic ecstasy, much to Ourumov's disgust. Together they arm and program the GoldenEye to destroy the complex, and escape with traitorous programmer Boris Grishenko.

Natalya Simonova, the lone survivor of the attack, contacts Grishenko and arranges to meet him in St. Petersburg, where she is kidnapped by Onatopp and Boris. Assigned to investigate the events in Russia, 007 flies to St. Petersburg and arranges a meeting with the mysterious Janus via crime-boss Valentin Zukovsky. Onatopp attempts to surprise Bond as he exits the pool at the Grand Hotel Europe, but is outmanoeuvred and held at gunpoint. Onatopp tries to seduce him but Bond shoves her off him. Losing his gun in the process, Onatopp attacks him, climbing on top of him and trying to constrict him with her thighs as she did with the admiral. However, Bond drops her into a vat of hot water and re-obtains his gun, forcing her to bring him to Janus. Onatopp drives Bond to an abandoned statue junkyard, claiming that Janus is waiting for him. After knocking her out, Bond exits her car and walks towards the Tiger helicopter which he spots in the distance, meeting with Janus, who reveals himself as old colleague Trevelyan and attempts to kill him.

Later, Bond pursues a fleeing Ourumov who has taken Natalya aboard Janus' converted missile train. 007 drives his tank on the rails, intending to derail the train; much to Onatopp's glee. The train ends up derailed and Bond boards the wreckage - confronting its dazed passengers with a Kalashnikov rifle. A standoff ensues with an unarmed Onatopp and Trevelyan bargaining for their lives using Natalya, who is being held at gunpoint by Ourumov. After Bond states the girl means nothing to him Trevelyan gestures to have her killed, fleeing from the carriage with Onatopp as 007 swings around to shoot the General. As Trevelyan and Onatopp escape by helicopter, he locks Bond in the train with Natalya, setting it to self-destruct. He fails to kill them and Natalya manages to triangulate the location of Janus' Cuban base of operations before the train explodes.

Trevelyan and Onatopp depart Russia and head to Cuba, pursued by the British and American intelligence agencies. While searching for GoldenEye's satellite dish, Bond and Natalya are shot down and crash land in the Cuban jungle. Onatopp rappels down from a helicopter and attacks Bond. Kicking the wounded spy around, Xenia violently grasps him between her thighs, informing him that, this time, the pleasure is going to be all hers (a running joke between the pair, starting with the casino scene). Despite Bond's best attempts, he begins to succumb to her orgasmic embrace, and is saved by a branch-wielding Natalya's intervention. Blocking the attack, Onatopp grabs her by the face and instructs her to wait for her turn, before headbutting her aside. The interruption gives Bond the opportunity he needs and he reattaches her jump rope, using her rifle to kill the crew of her helicopter above. In the ensuing chaos, the henchwoman is violently thrown backwards by the force of the chopper's descent, and is caught between two curiously shaped branches, crushing her to death in an ironic manner. Bond and Natalya stare at her corpse with Bond remarking "She always did enjoy a good squeeze."

After the fall of the KGB in the 1991 Coup, Xenia joined the biggest Crime family in Russia, the Janus Crime Syndicate. She was eventually called upon to use her unique talent of crushing rib cages with her thighs to obtain the Tigre helicopter from Monte Carlo where it was being shown to the United States Navy. She did this by using her natural charm to lure in the American Naval Admiral Chuck Farrel. On her way into town in her yellow Ferrari 355, she came upon James Bond in an Aston Martin DB5, who challenged her to a race. The two sped along the mountain roads of Monaco until a tourbus appeared coming toward them. Xenia was able to stay in her lane while Bond swerved off into a tourist viewpoint. Xenia then made her way to a Casino where she met Admiral Farrel. After making sizable winnings at the Baccarat table and scaring off the other players, she was joined again by James Bond. He won the hand, and Xenia left the table with her money. At the Casino's bar, she and Bond shared a drink before she left with Farrel, and took him aboard her yacht the Manticore, where she killed him after three bouts of sexual intercourse in two hours by crushing his rib cage with her thighs. After a few more minutes revelling in the ecstasy of her latest kill, she was collected by General Arkady Ourumov, and the two broke in to the Tigre 's unveiling where they took the place of the existing test pilots and stole the helicopter. She and Ourumov then flew to Severnaya Station where she ordered the security doors open while they performed a test launch of the GoldenEye weapon. After they obtained the weapon, Xenia massacred the technicians while Ourumov set the weapon to destroy the facility. Even miles away from the Facility, Xenia and Ourumov felt the blast of the GoldenEye. 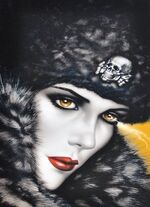 She was later assigned to aid Boris Grishenko in the kidnapping of the escaped Severnaya technician Natalya Simonova. Boris lured her behind a curtain in a Russian Orthodox Church, where Xenia waited with a hypodermic needle that she used to incapacitate the technician before heading out to another job. She then waited in the Turkish Bath at the Grand Hotel Europe for James Bond to arrive. He found her in the mist and dragged her into the open. She then removed her towel, and made sexual advances on the man until he put down his gun. They maintained a short intercourse before Xenia locked her thighs around his chest and began to constrict him. In an attempt to get a better hold, Xenia moved her legs, and Bond used this opportunity to push Xenia off and hold her at gunpoint. He demanded to see Janus, leading Xenia to ask whether or not he would like to put any clothes on first. He then took her up to his room where he tied her up as he changed, which led her to an obligatory bondage joke. She then directed him to the Statue Park, where old Communist icons were dumped and introduced him to Janus.

They left him in the helicopter, with it rigged to explode before leaving for their train. Xenia was then there to receive Natalya Simonova when she was again captured, this time by by Ourumov. She and Alec Trevelyan were then held captive by Bond, who had broken aboard the train to rescue her, before they escaped it in a helicopter hidden in one of the cars after rigging it to explode. They then traveled to Havana Cuba, where the control station for a second GoldenEye, codenamed Mischa was located. After spotting Bond and Natalya near the facility, she dropped down from her helicopter on a tether, and attempted to crush Bond. Natalya attacked her from behind, which was long enough for Bond to steal her Machine Pistol, which he used to shoot her helicopter off course. Unable to regain balance, the helicopter dragged Xenia between two tree branches, where she was crushed by the force of the pull against the unyielding wood.

Onatopp has appeared in a number of James Bond video games as a playable multiplayer character. Her first appearance was in the 1997 video game adaptation of GoldenEye, GoldenEye 007 for the Nintendo 64. Similar to the film, she is killed in the jungles of Cuba after battling with Bond, however this method of death is more conventional, getting shot. Xenia also appears in a prior stage on the train in Russia. Shooting her will not kill her, but allow Bond precious time to escape as she shouts to Alec Trevelyan she is wounded, thus postponing Trevelyan's time bomb.

Xenia Onatopp later appeared in the 2004 spin-off Bond game, GoldenEye: Rogue Agent. Set in an alternate timeline, with its focus on the underworld of the 007 universe, Onatopp is employed by Dr. Julius No as his chief enforcer. She participates in the underworld feud between Dr. No and Auric Goldfinger and leads his forces in an assault on Goldfinger's Midas casino in Las Vegas; the goal of which is the theft of a super-weapon named the OMEN. She encounters Goldfinger's golden-eyed enforcer during the attack; avoiding him by shooting down an enormous chandelier to block his path. Her fate varies between the console and Nintendo DS versions of the game. In the DS variant, she is disintegrated by the OMEN along with the rest of Dr. No's men in the casino vault. In the console version, she retreats to Dr. No's staging area at the Hoover Dam, where she organizes a defence of the structure. However, GoldenEye and Oddjob manage to bypass her security and detonate Dr. No's seismic bomb; causing the dam to disintegrate. As GoldenEye makes his way to the surface Onatopp is waiting for him and paralyses him with a tranquilliser. She straddles him and starts to crush him between her thighs, but inexplicably changes her mind and instead tries to kill him with a tiltrotor fighter aircraft. Her aircraft is subsequently shot down and in a gunfight she falls from the top of the dam to her death. 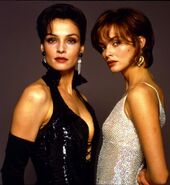 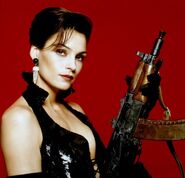 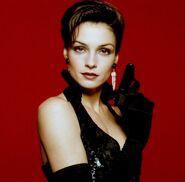 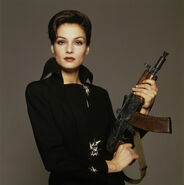 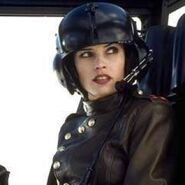 Xenia falls from the Hoover Dam in the console version of GoldenEye: Rogue Agent (2004).

Xenia During The Casino Scene 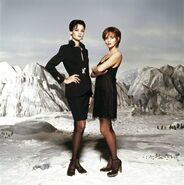 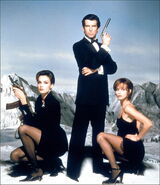 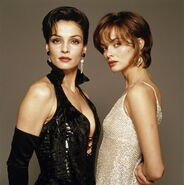 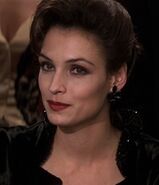 Xenia on a rejected cover design for GoldenEye

Xenia on a French paperback cover by LeFranq 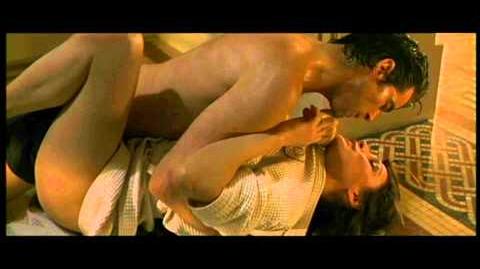