View source
watch 01:39
Hawkeye Is Here To Amaze - The Loop
Do you like this video?
Play Sound

Tang Lin Zao, or simply Zao, was a fictional North Korean intelligence operative and terrorist and the right-hand man of diamond magnate, Gustav Graves. A major antagonist portrayed by American actor, Rick Yune, the character was created for the 2002 James Bond film, Die Another Day, and its accompanying novelization by Raymond Benson. Still portrayed by Yune, he would later be re-imagined for Activision's 2012 James Bond video game, 007 Legends.

Originally a Korean operative under the command of Colonel Tan-Sun Moon, Zao aided his superior in illegal arms deals at the North Korean Demilitarized Zone.

Defeat at Moon's base

In one such deal, James Bond attempted to infiltrate Moon's base, posing as a diamond smuggler called Van Bierk, hoping to expose Moon. Bond rigged his case of diamonds with explosives as a safety measure. Not trusting Bond from the first moment, Zao checks his identity with Moon's western associate and finds out that Bond is a British spy sent to kill Moon. When he tells Moon about this, the Colonel blows up the helicopter in which Bond arrived and plans to kill Bond as well, but Zao is then called by Moon's father, General Moon, who tells him that he will arrive at their base soon. Moon and his men then quickly leave the base with the hovercrafts and weapons, so that his father doesn't find out about his weapon dealing. He leaves Bond to be shot by his men but the secret agent escapes by blowing up the diamond suitcase, knocking over Zao and the other Korean soldiers, and fleeing with the last remaining hovercraft. Zao's face is left being disfigured by several diamonds engraved into his face.

Zao was captured some time later by the British Secret Service, while he was about to blow up a summit between China and South Korea, killing three Chinese agents before getting caught.

Initially believing that he is to be executed, Bond is surprised when the soldiers instead drive off, leaving him alone on the bridge. A voice then tells Bond to keep walking via loudspeaker in English. When he keeps walking toward the other end of the bridge, a figure emerges from the mist, approaching him. Bond recognizes Zao, clad in western prison attire. Bond realizes that he is to be exchanged for Zao, who now is disfigured as the diamonds from the exploded suitcase are now permanently embedded into his face. Both stop a moment to threaten their opponent, and then Zao continues to walk to the Korean side while Bond returns to his people.

After fleeing from the Mi6, who think that Bond gave up critical information while he was interrogated, Bond meets a Chinese agent named Mr. Chang, claiming that he will kill Zao them if they manage to get him into North Korea. When asked what is in it for him, Bond answers that Zao has information he needs, namely the identity of Moon's source in the west. Chang leaves the room to discuss the situation with Beijing, and returns to Bond, sending him to Havana instead of North Korea, as Zao has been spotted there.

Bond's sources at Havana lead Bond to the private clinic of Dr. Alvarez at Los Organos, where Zao is supposed to be located. Arriving at the clinic, Bond finds a special tract behind a hidden door. There, he finds Zao, who is in the middle of a process to alter his appearance to make him appear to be of European (specifically German) ancestry. Zao is unconscious, with a recorded message indoctrinating him to his new identity and language while he sleeps. However, Bond wakes Zao with the intention to find out who is paying for Zao's alterations as he thinks that this person is the same who set him up in North Korea. Zao kicks and engages in a short fight with Bond in which 007 is able to grab Zao's necklace and rip it off. The terrorist escapes from the room. Pursued by Bond and NSA agent Jinx, he manages to get to his escape helicopter and escapes from the clinic while being shot at by the two agents.

While investigation the phial Zao wore around his neck, Bond finds out that it contains blood diamonds from Sierra Leone, engraves with the mark of diamond trader Gustav Graves.

When Bond arrives at Graves' place at Iceland, a palace made from pure ice only built for the demonstration of Icarus, he is greeted by Graves. While the guests entertain themselves inside, Graves is using his dream machine. He is interrupted by a man who is revealed to be Zao. Seeing his old friend for the first time after Zao's departure, Graves looks at his unfinished face and asks him who did that. Zao responds that it is Bond's work and Graves gleefully tells him that he has met Bond and Bond did not recognize him at all. Graves then asks Zao of news of his father and Zao tells him that General Moon still mourns his death.

When Jinx, who has also reached Iceland, breaks into the complex where Graves' chambers are located to kill Zao whom she expects to find him under the dream machine's mask. However, when she takes the mask off, Zao looks at her and Graves attacks her from behind, wearing the prototype of his Icarus suit. Graves knocks out Jinx. When Jinx awakens, she is strapped to a chair in a different part of the complex. Zao, who has been given the Icarus suit to interrogate Jinx first tortures her with the electricity created by the suit, then asks her why she came to kill him. Getting nothing but insults out of her, Zao tells Graves' henchman Mr. Kil to activate the lasers surrounding the chair to get Jinx to talk. When Jinx eventually passes out from the pain without having yielded any secrets, Zao realizes that she won't talk and gives Kil his gun to finish her off, but Kil tells him that he will use the laser. Zao then leaves Kil to it and exits the room.

After Bond has killed Kil after a fight and saved Jinx, she tells him that Zao is here and that he brought the dream machine from Cuba. However, finally realizing who Graves truly is, responds that Zao didn't bring the machine, it was brought here before by Zao's master Tan-Sun Moon, now going under the alias Gustav Graves.

When Bond is captured by Graves and about to be killed, Bond goads Zao into hitting him into stomach in order to allow him to fall to the ground. Using a special ring he got from MI6's quartermaster, he breaks the glass panel that covers the entire floor in order to fall into the lower floor. As Bond runs off, Graves orders Zao to follow and kill him but Bond escapes with Graves' speeder, driving off into the ice plains at insane speed. When Zao returns and tells Graves that Bond escaped, Graves decides to unleash Icarus. To that end, Zao brings over General Dong, General Li & General Han for the demonstration.

While Graves hunts Bond down with Icarus, Zao and Miranda Frost go to the room where Jinx is imprisoned to kill her. When they open the door, Zao is immediately kicked in the face, but Miranda stops him from extracting revenge. After telling Jinx that Bond fled to save his own skin, they lock the door again to kill Jinx by the destruction of the palace.

When they believe Bond to be dead, Graves leaves Zao with a minimal force to watch over the final preparations at the palace, intending for him to follow after they are done. Zao, Frost and the rest then leave by plane.

During the race, Bond sees that Graves has activated Icarus and aimed it at the ice palace, in which Jinx is still imprisoned. Followed by Zao, he drives towards the palace and breaks through the front doors. Inside, Bond drives up a ramp to the first floor where he waits for Zao. When Zao arrives, he sees Bond's car parked straight in front of him. Activating blades at his car's front, Zao drives at Bond, intending to impale him. When Bond uses his camouflage mode again, Zao is still confident because he knows that Bond is only invisible with no chance to disappear but Bond uses special spikes to partially drive up the wall, which causes Zao to screamingly drive over the edge of the balcony at which Bond had waited. Slamming through the ice into the water below, Zao manages to get out of his car, but when he reaches the surface Bond shoots an ice chandelier above the terrorist, which falls onto Zao and impales him, killing him.

Still portrayed by Rick Yune, Zao appeared in the 2012 video game 007 Legends. His role is the same in the game as in the film except that he is the only gunner of Graves having a name, the others being only of guards that the player can beat easily. Zao replaces Mr. Kil in the battle of the lasers against Bond where he is defeated by defenestration. He survives and makes a final appearance by chasing Bond in the car, as in the film, except that his fate differs from that of the film as he dies killed by Icarus.

Zao injured in the explosion at the base

Zao escapes the clinic by helicopter

Zao pursues Bond in a deadly race across the frozen lake

Zao dives away from his car 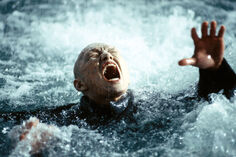 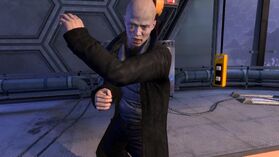