Zorin's Warehouse Guard was a fictional security guard employed by wealthy industrialist Max Zorin at his French residence, the Château de Chantilly. A minor character portrayed by British actor Ron Tarr, he appeared during the 1985 James Bond film, A View to a Kill.

Together with another guard, this man notices some suspicious activity inside the secret operating room, located underneath the stables at Zorin's chateau. Indeed, James Bond and Sir Godfrey Tibbett are sneaking around the subterranean facility. With their pistols drawn, the guards search the area near a conveyor belt inside a storage room. Suddenly, this guard is attacked by Sir Godfrey, but manages to knock him out. Bond however overwhelms both guards, and puts them onto the conveyor belt, where they are tied into packages like the other crates on the belt. A later scene shows that both guards survived. However, we don't known their final's fate. 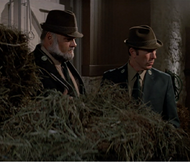 The two gards before entering the subterranean facility

The guard about to fights Bond.
Add a photo to this gallery

Retrieved from "https://jamesbond.fandom.com/wiki/Zorin_Warehouse_Guard_1?oldid=88002"
Community content is available under CC-BY-SA unless otherwise noted.